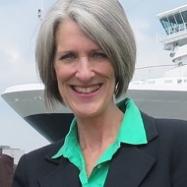 Anne Kalosh covers global stories, reporting both breaking and in-depth news on cruising's significant people, places, ships and trends. A sought-after expert on cruising, she has moderated conferences around the world, including the high-profile State of the Industry panel at Seatrade Cruise Global. She created and led the acclaimed itinerary-planning case study for Seatrade's cruise master classes held at Cambridge and Oxford universities. She is the cruise columnist for AFAR.com, and her freelance stories have appeared in a wide range of publications, from The New York Times to The Miami Herald.

Costa Toscana floated out at a snowy Meyer Turku
Jan 15, 2021
With the shipyard's traditional cannon blast, Meyer Turku opened the floodgates to float out Costa Toscana in bitter winter conditions.

Celestyal delays restart to April 24, shifts some cruises to new Lavrion terminal
Jan 14, 2021
Celestyal Cruises pushed back the start of its 2021 season to April 24 and will move operations for its 'Iconic Aegean' itinerary from Piraeus to Lavrion.