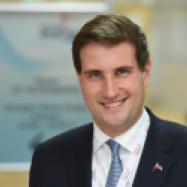 Frederik Erdmann is Seatrade's German cruise correspondent since 2002. Following secondary school graduation he joined the port agency network, Sartori & Berger, on a vocational training program. After subsequent studies of Business Administration, Frederik Erdmann held various positions at Sartori & Berger until 2010. After a period of working with the Flensburg Chamber of Commerce, he was appointed Designated Person Safety/Security, Environment and Quality of the coastal ferry operator, Wyker Dampfschiffs-Reederei. As a maritime trade press correspondent and visiting lecturer of the Flensburg University of Applied Sciences,

Frederik Erdmann concentrates on ferry and cruise ship management, port development as well as safety and security in passenger shipping. He is also a member of the Flensburg Chamber of Commerce's Tourism Committee.

Change at Scylla helm in a period of extensive expansion
Feb 19, 2019
Scylla AG, one of Europe's leading river cruise operators, is getting new leadership as the current managing director, Manuela van Zelst, is leaving to embark on a new career.

A-Rosa launches fleet upgrade and expands to the UK
Jan 14, 2019
Rostock-based A-Rosa Flussschiff has launched a multimillion-euro lifecycle program for its fleet trading mainly on the Rhône and Danube rivers. In other news, the line is expanding to the UK with a branch office to...

TUI Cruises sets carnival and 'schlager'-themed sailings
Dec 14, 2018
Renowned for its heavy metal cruises, TUI Cruises is branching out with a carnival-themed sailing in the Mediterranean and a 'schlager' pop music cruise in the Baltic.