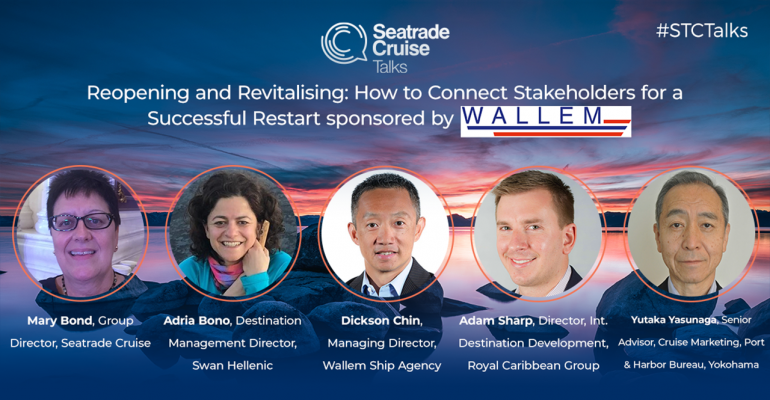 While international cruising remains at a standstill, signs of recovery are beginning to emerge. According to Ship Agency Managing Director Dickson Chin, a full global restart will rely on a pragmatic approach from governments and close collaboration between authorities and stakeholders.

Speaking as part of an expert panel during a recent Seatrade Cruise Talks webinar, Dickson Chin provided an update on the status of the cruise sector and described how its recovery is likely to unfold.

He began by addressing the situation in Hong Kong, an Asian cruise hub, and the location of Wallem headquarters: “After almost 15 months of suspension here in Hong Kong, we are finally getting back to business. We have watched as nearby states have relaunched domestic cruising, and now it’s our turn. Our focus will be on keeping people safe and the cruise lines running.”

To this end, Wallem is collaborating with the local government to work out the finer details of the restart protocol, which Dickson describes as the strictest in the world. “The protocol dictates that crew arriving in Hong Kong will have to quarantine for a length of time determined by their point of origin,” he explains. “They would also have to be vaccinated and take regular tests.”

A similar set of measures applies to passengers, with permission to board granted only to vaccinated Hong Kong residents returning negative PCR tests within the 48 hours before embarkation. Ships will initially operate at just 50% capacity. “This is a very strict approach, but we hope it will provide the platform for us to reopen to international cruising,” says Dickson Chin.

Nevertheless, normal service should not be expected in the immediate future; he advises: “The world is currently engaged in a vaccine race, with different countries at different stages in their rollouts. Until every country representing the major cruise audiences worldwide has its population protected against the virus, full international cruising will remain off the table.”

Against this background, one Asian state has led the way in relaunching its domestic operations. “Singapore did well to control the number of infections from the start,” says Dickson. “It was, therefore, able to resume domestic cruising without requiring that passengers be vaccinated. Every cruise line has extensive health and safety protocols in place, so it’s a question of what each government is comfortable with and what the situation is in each jurisdiction.”

While major ports like Hong Kong and Singapore progress with their domestic restarts, smaller ports in the region are hoping to establish themselves as desirable international cruise destinations. “The pandemic has instilled in people a fear of large crowds,” explains Dickson. “As a result, demand is growing for quieter, more isolated destinations. Southeast Asia has thousands of islands that don’t traditionally feature in cruise itineraries but can provide the exotic getaway tourists are looking for.”

Dickson describes the potential for second-tier ports in the Philippines, Indonesia, and Thailand to benefit from an appetite for more exotic itineraries as a “silver lining” of the pandemic. He is similarly optimistic about the outlook in Europe, where vaccine rollouts are generally in the advanced stages, and the resumption of cruise operations is underway.

Regarding the full, global relaunch of the industry, he underlines the importance of collaboration between authorities and industry representatives: “Governments need to work together to find a safe and sustainable way to reopen internationally. They will rely on us, as industry stakeholders, to ensure they have all the information they need to make informed decisions on when and how to resume operations. Public health is everyone’s number-one priority, but we need to keep in mind how important cruising is to local communities from an economic perspective.”