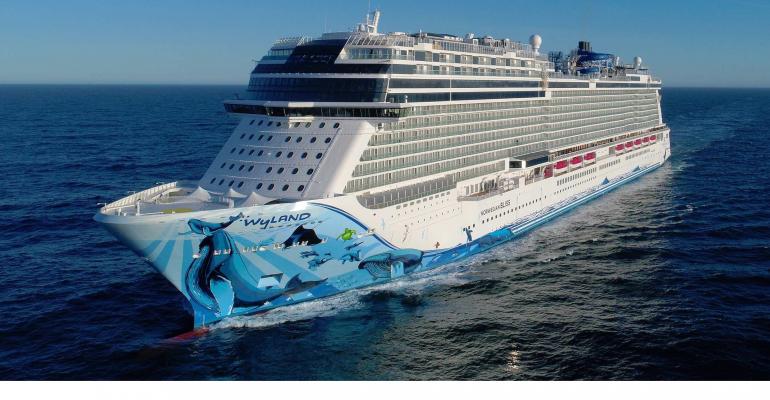 Norwegian Bliss, here, and Norwegian Encore will be carrying out a small crew change on Saturday in Gothenburg

Norwegian Bliss and Norwegian Encore each have capacity for 1,700 crew but during this out-of-service period, each is carrying approximately 200 crew required for safe manning.

About 50 crew from each ship will change over

Approximately 50 crew members on each ship will disembark and be replaced when they call at Gothenburg.

'Many of these crew members have been at sea for a very long time, some for up to a year. So we are happy that together with the agent and APM Terminals we can help them get ashore so that they can get home to their loved ones as soon as possible,' Harbormaster Åsa Kärnebro said.

Norwegian Bliss and Norwegian Encore left Norfolk in the US on Aug. 1, and their crews have not gone ashore since. In Gothenburg, the departing crew will be transported from the quay by bus directly to Landvetter Airport where they'll fly home to their respective countries as soon as possible.

The two ships normally sail from the US but due to the coronavirus pandemic, 'they have now sailed to Europe, and it is for several different reasons that they choose to position themselves here,' according to Martin Eskelinen, cruise operations manager at the Port of Gothenburg.

'On the one hand, the industry hopes cruising will be able to start earlier in Europe than in other parts of the world. In addition, there are many shipyards here where the ships can undergo the necessary maintenance before they are put back into service. That they come to the Port of Gothenburg is because we have the size, capacity and willingness to receive them,' Eskelinen added.