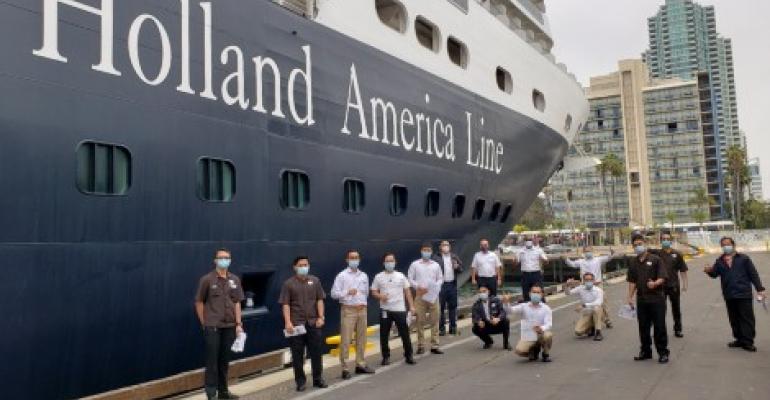 Crew members from Holland America Line's Koningsdam received their first dose of the Pfizer COVID-19 vaccine Wednesday at the Port of San Diego.

Through a program arranged in partnership with Sharp HealthCare, a not-for-profit regional health care group, 118 crew came ashore to be vaccinated.

During a brief ceremony, Capt. Henk Draper said the vaccinations were a welcome step as Koningsdam waits to resume cruising. Also on hand were Rafael Castellanos, commissioner of the Port of San Diego, and Brett McClain, EVP and COO of Sharp HealthCare.

HAL President Gus Antorcha thanked Sharp HealthCare and everyone at Port of San Diego for offering the terminal and 'allowing us to make this process safe and smooth.'

Other ships planned, at Los Angeles, too

Today Sharp HealthCare is scheduled to vaccinate 179 crew aboard Noordam, which will be at a anchorage just off Coronado for the day. Then 231 Nieuw Amsterdam crew are to receive Pfizer vaccines from healthcare provider Ambulnz on Friday while the ship is alongside at San Pedro, Port of Los Angeles.

Starting in October through April, Koningsdam and Zuiderdam will homeport at San Diego for cruises to Hawaii, Mexico, the Pacific Coast, Panama Canal and South Pacific . In total, four ships will make 35 calls: Koningsdam in its inaugural season at San Diego (21 calls), Zuiderdam (12 calls), Eurodam (one call) and Nieuw Amsterdam (one call). The estimated economic impact of each ship visit is $300,000 for the San Diego region.