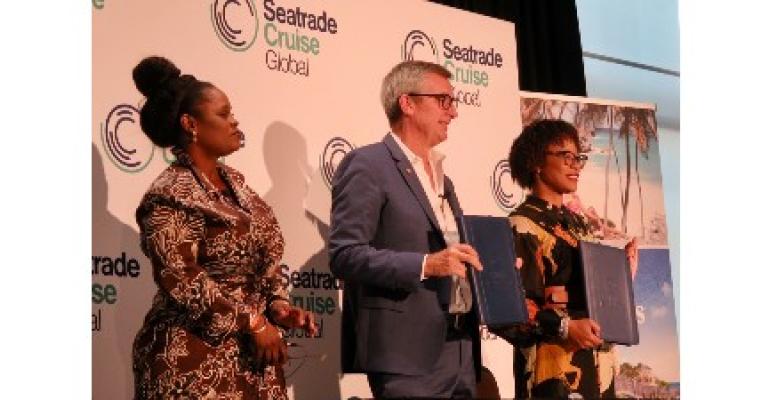 Royal Caribbean Group will court Barbadians for a wide range of cruise ship jobs, and Barbados will relocate its cruise operations office from Bridgetown to Miami.

The news was announced by Barbados Minister of Tourism and International Transport Lisa Cummins with Royal Caribbean International President and CEO Michael Bayley on the opening day of Searade Cruise Global.

When passengers and crew were stranded on cruise ships at the start of the COVID-19 pandemic, 'It was Barbados that stepped up and was incredibly supportive and helpful,' Bayley said, allowing ships to disembark travelers there and fly home — instead of closing borders, as many countries did.

'When the chips are down, all those relationships and connections really do matter,' Bayley said.

A friend to the cruise industry in the worst of times

'We were a friend to the cruise industry in the worst of times,' Cummins said, and the memorandum of understanding announced with Royal Caribbean about jobs for Barbadians is a way for the company to repay that.

'You are going to lead the way with discussions with other cruise lines. Thank you for being the trendsetter and trailblazer,' Williams told Bayley at the news conference that was livestreamed from Seatrade Cruise Global to Barbados.

The exact number of people to be recruited hasn't been determined. But Bayley said Royal Caribbean employs about 50,000 crew from all over the world and 15% to 20% of those positions turn over each year. So the conpany needs to source about 10,000 new crew annually to replace them; plus, with two to three new ships added per year, there's demand for about 6,000 more.

So there's an opportunity a 'fairly significant' number of those 16,000 jobs to be filled by Barbadians. A recruitment fair is planned in six to eight weeks, then it usually takes four to eight weeks before new hires would be assigned to ships, according to Bayley.

As for moving its cruise operations to Miami by late summer/fall, Barbados would start by deploying a senior business development officer to set up the office, then create a new director of cruise position there, Cummins said.