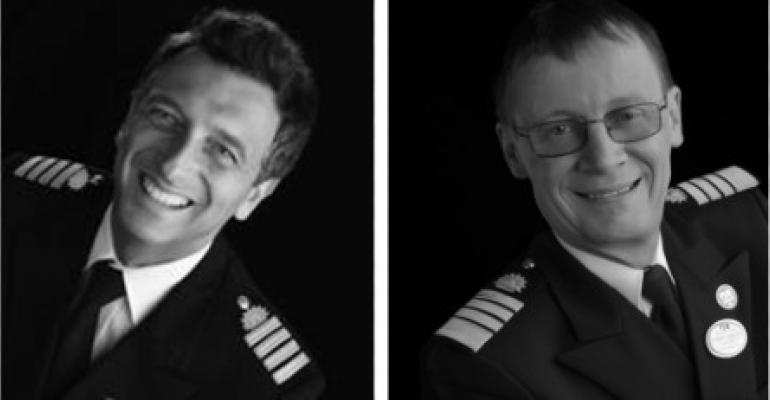 This is the sixth and final Royal-class ship for Princess Cruises. It will sail an inaugural season of Mexican Riviera and California xoast cruises.

Gennaro Arma commanded Diamond Princess during its COVID-19 crisis at the start of the pandemic. As a result, he was honored as a Commander of the Order of Merit, Italy's highest order; and selected as one of the 20 most influential Italian characters of the year by Vanity Fair in December 2020. Arma also received the title of Magister of Amalfi Civilization for the Byzantine New Year, the Emanuela Loi award for courage and the Assarmatori prize from the Italian maritime association awarded by the minister of transportation.

A native of Sorrento, he began his career with Princess in 1998 as a cadet and moved up the ranks, achieving his first command as captain of Sea Princess in 2015, where he navigated the ship on two world cruises. He took the Diamond Princess helm in 2018.

John Smith joined Princess in 2007 as a first officer and quickly rose through the ranks to become captain, taking command of Grand Princess in May 2018 and spending two years on board. A native of Cheltenham in the UK, he joined the Merchant Navy in 1983 as a deck boy and gained his first certificate in 1988, rising to captain rank on board tankers and ferries before signing on with Princess.

Vincenzo Alfi started as a second engineer in 2011 on Ruby Princess and served on ships including Crown Princess and Royal Princess. Born in Crotone, Italy, he graduated from the Italian Nautical Institute and had his first contract as an engine cadet in 1991 aboard a container ship.

Tomislav Ljoka joined Princess in 2003 as third engineer officer and reached his first contract as chief engineer in 2019 aboard Sea Princess. He’s served on ships including Crown Princess and Coral Princess. Born in Zadar, Croatia, he graduated from the Marine Engineering High School and sailed as engine cadet on bulk carriers. He studied at the University of Piran/Portorose University and graduated as a marine engineer, completing his cadetship on oil tankers.

Over 17 years with Princess, Alessandro Genzo has served on ships including Royal Princess, Regal Princess and Enchanted Princess. At the age of 10, he watched 'The Love Boat' with his grandmother and decided he wanted to be a cruise ship captain. Born in Trieste, he studied at the Nautical College then joined the Italian Navy, serving on a destroyer. Toward the end of his service, he transferred to the Morosini Navy School in Venice as an instructor.

Petar Lesic joined Princess in 2006 and became staff captain in 2018. He’s served on Diamond Princess in Japan, one of his favorite destinations. Born in Split, Croatia, he followed his family's seafaring tradition and graduated from the Maritime University before starting his career in the Merchant Navy in 2000.

Since signing on with Princess in 1988 as a front desk receptionist, Richard Harry has served on the newbuild teams for seven ships, including Sky Princess and Enchanted Princess. He was born in Farnborough, Englandk and lives in Bristol with his wife (they met on Golden Princess) and their two children.

After seeing a Princess ship in Curaçao, Jasper Wolthuis decided to pursue a seagoing career. He signed on as junior assistant purser in 2002. Wolthuis was born in Leiden, Netherlands, and after receiving his degree in hotel management and economics he moved to Curaçao to work in the hospitality industry.