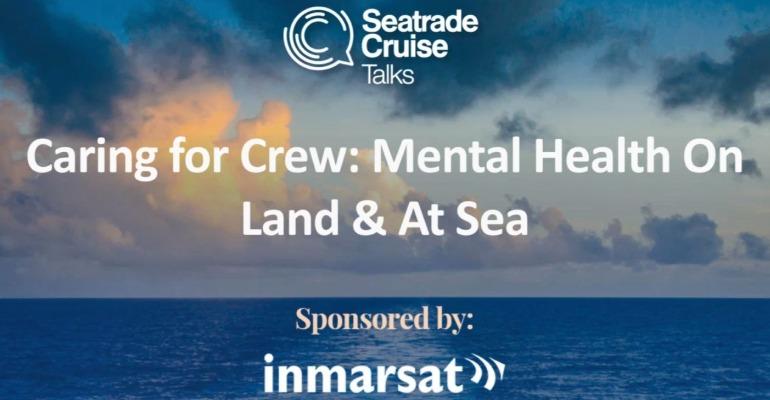 ‘Technology is not a silver bullet, but it can help,’ claims Inmarsat Senior VP Peter Broadhurst on the subject of ways to improve the mental health of seafarers.

Widespread adoption of tools and programmes that produce ‘the right data so you put support in the right place to begin with’ and help ‘spot welfare trends’ were suggestions put forward by Broadhurst as he explained the adoption of technology in ‘engine monitoring and performance monitoring - not monitoring crew.’

Referring to Inmarsat’s recent report, Welfare 2.0, he asserted that mental health issues among seafarers are ‘just as much a safety problem as a welfare problem.’

The comments came during ‘Caring For Crew: Mental Health On Land & At Sea’, a live webinar sponsored by Inmarsat and presented by Seatrade’s Editor Video Production and Deputy Editor Holly Payne.

Founder of Mental Health Support Solutions (MHSS), Clinical Psychologist and Psychotherapist Charles Watkins called for a new protocol that would see a ‘psychological first aider’ on board cruise ships. ‘We’re trying to implement it as a Standard for the industry,’ said Watkins before explaining the issues modern seafarers currently face on board some cruise ships. ‘Anxiety, worrying, catastrophizing… bullying and harassment… which we thought was not as prevalent, but unfortunately it still is.'

‘We embrace the approach of happiness drivers,’ said Michael Lopez, vice president, human resources, Royal Caribbean Group. ‘We conducted the largest cruise study ever, we received over 50,000 responses… We found there were eight happiness drivers with our crew.’ The results meant the company could partner with mental health professionals to come up with measures to support those having ‘a tough time' in isolation. 'We’re calling it the crew journey,’ he added.

Describing mental health as still carrying ‘stigma,’ Kern recommended giveng crews paid days off work. ‘A pilot programme with a cruise line streamlining and reshifting the workload was able to reduce exhaustion and cynicism between 25% and 35% [of seafarers] - and crew became happier and more productive,’ she added.

The webinar will be available to watch in early 2021.

The panelists recently shared their tips to improving mental wellbeing.