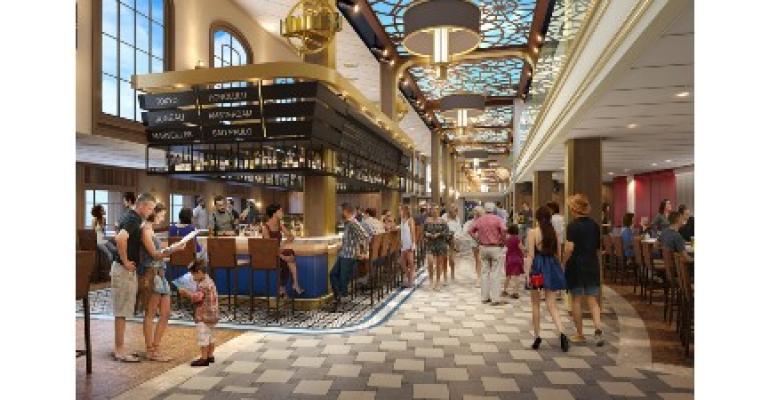 Carnival Celebration will sport a new zone, The Gateway, dedicated to travel, with a special bar, big virtual windows with changing displays, theme nights and a reprise of Emeril’s Bistro.

The two-deck space, located where the French Quarter is found on Mardi Gras, will have design and décor inspired by grand terminals, transportation stations and departure points around the world. Theme nights will be immersive with music, drinks, food and entertainment based on different places.

The Latitudes Bar, featuring travel-themed chairs and menus, will be topped by a mechanical split flap display board. This is a modern take on the classic railway station 'departures' boards with their distinctive 'clack clack' sound. It will display the menu of international beers and cocktails and periodically will come to life with messages that support happy hour events and theme nights.

This board is being custom built by Oat Foundry in Philadelphia, the hometown of Carnival President Christine Duffy, who announced The Gateway during a virtual briefing today. Duffy called it 'old world meets new technology.'

With a daily cruise-staff-hosted Celebration Happy Hour at Latitudes Bar that will serve as an opportunity to celebrate special occasions and milestones like birthdays and anniversaries, those may pop up on the board. And, who knows, Duffy suggested, maybe even a proposal?

The Gateway's promenade will be lined by a dozen large 'windows' that are actually high-definition screens projecting changing scenes. By day, those may be sunny skies, hot air balloons or Carnival's AirShip. By night, the views will support varying themes, such as 'Abroad in Europe,' 'Far East Voyage' and 'Mexico Lindo.' 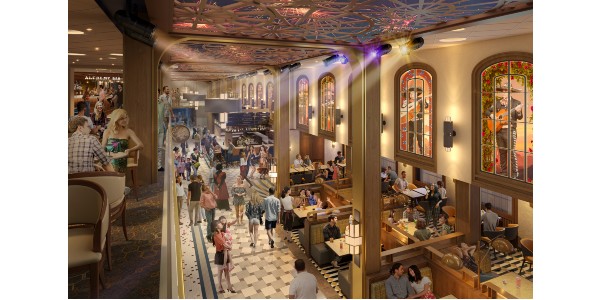 Virtual windows on with scenes for a "Mexico Lindo' theme night

A nearly 100-foot-long LED ceiling will be complemented by show lighting and a sound system to create an immersive experience throughout the zone.

On 'Mexico Lindo' night, for example, the window displays and surrounding technology may take guests on a journey through ancient Mayan cities, beautiful beaches, lush jungles or magical towns, with themed offerings like special margaritas, palomas and agave tastings, accompanied by a specialty food item.

The Gateway will also house a second seagoing restaurant by Emeril Lagasse, whose Bistro 1396 is aboard Mardi Gras. On Carnival Celebration, Bistro 1397 (the number reflects the ship's hull designation at Meyer Turku), will feature favorites from Mardi Gras like barbecue shrimp jambalaya and, new, the chef's favorite international dishes.

The restaurant will provide additional window seating by moving the galley, according to Carnival's Glenn Aprile, director, newbuilds product development, who appeared with Duffy.

The Gateway will also feature a large digital map displaying the real-time locations of Carnival ships with a 'hello' in the language of each destination.

As well, the zone is home to the recently revealed bar and lounge, the Golden Jubilee, which ties into the travel theme, celebrating Carnival's 50 years of Fun Ships.

And that makes six zones

The Gateway is the final zone aboard Carnival Celebration, joining 820 Biscayne, Celebration Central, The Ultimate Playground, Summer Landing and Lido.