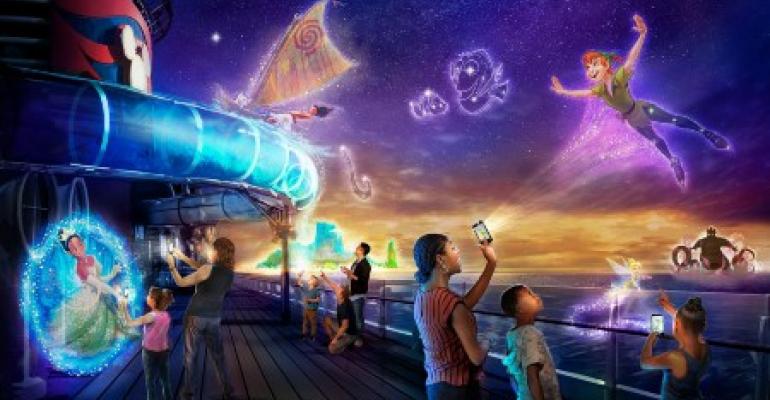 Passengers will use their spyglasses to reveal never-before-seen views of the stars, where enchanted constellations take shape as recognizable icons from Disney and Pixar stories
Travelers of all ages can explore Disney Wish and interact with Disney characters in a novel way as part of a new adventure involving quests and a wishing star.

These spyglasses will be the key to unlocking adventures, solving puzzles, conquering quests involving the likes of Moana, Peter Pan, Tiana and Nemo and, ultimately, saving the day.

Families are heroes of a grand adventure

'We set out to give families the opportunity to see themselves as the heroes of a grand adventure that can only take place aboard a Disney ship,' said Davey Feder, software product manager, Walt Disney Imagineering.

Disney Uncharted Adventure lets players interact with 11 characters and brings the ship to life, uniting the power of storytelling and the possibility of technology 'as only Disney can do,' he continued.

While a mobile device is needed to play, 'this isn’t a traditional mobile gaming experience,' Feder said. 'This is a heads-up, active experience that can be played with family and friends. The magic will happen all around the ship. The spyglass is not where the adventure takes place — it’s just the tool that brings the ship to life, opening portals into new worlds and allowing guests to interact with them.'

The adventure begins before setting sail. Leading up to a Disney Wish cruise, the app will reveal a special greeting from Capt. Minnie Mouse and Mickey Mouse, who'll help travelers prepare for the journey by highlighting the role of the night sky in seafaring — particularly the wishing star that lights the way.

Mission to restore the wishing star

Once on board, passengers will use their spyglasses to reveal never-before-seen views of the stars, where enchanted constellations take shape as recognizable icons from Disney and Pixar stories. When the wishing star suddenly bursts and shatters, its pieces scatter across the sky, each landing in a far-off realm. Captain Minnie will need help to navigate the ship to these uncharted worlds to collect the pieces of the star.

Passengers choose where to go next, charting a course toward locales such as Motunui, New Orleans, Never Land and Sydney. Each quest will take them on a journey throughout Disney Wish as they're prompted to seek artwork, signs and props that transform to bring the characters and settings of these story worlds to life around them.

'We are infusing the Disney Wish with innovative technology, like augmented reality and physical effects, to create a hidden layer of magic that can only be unlocked with Disney Uncharted Adventure,' Feder said. 'Guests might admire a beautiful painting today without realizing that, hiding right beneath the surface, there’s a hoard of mischievous Kakamora from the world of Moana just waiting to escape and wreak havoc on the ship. A digital menu board might showcase what’s for lunch in the afternoon, but later it will host a cooking lesson in Tiana’s own kitchen.'

Quests range from teaming up with Moana to navigate canoes beyond the reef to making an epic dive into the East Australian Current with Nemo and friends.

The adventure culminates in a grand finale hosted in Luna, a new multipurpose entertainment venue. This will be a live interactive experience where familes gather with other players to take on a Disney villain in what Feder called an 'epic battle between good and evil,' with interactive media, a live host, lights and sound — 'an over-the-top cinematic finale' that culminates with restoring the wishing star to its rightful place in the sky.

Disney Uncharted Adventure is being developed with flexibility. Passengers will choose when and how to play, and can pick up where they left off. It's not necessary to complete all (or any of) the quests to attend and enjoy the finale event. Families can play together on up to six devices at once, or team up on only one or two devices at a time.

Disney Wish's maiden voyage is set for June 9, 2022, followed by a season of three- and four-night cruises to Nassau and Castaway Cay from Port Canaveral.