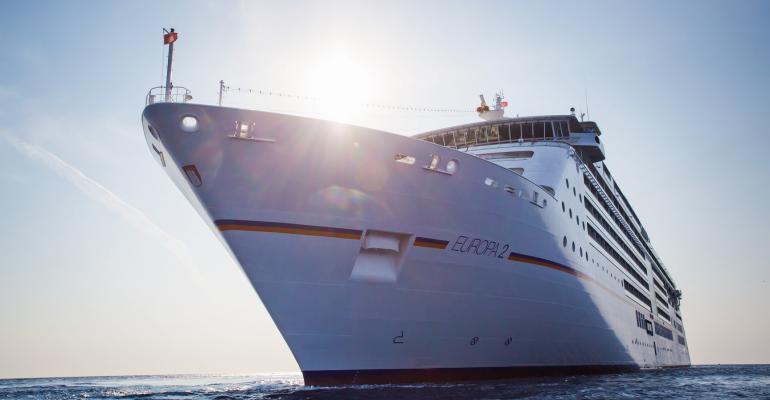 From immersive entertainment and F&B to new destinations: Europa 2 will call at Porto Santo Stefano for the first time in August

Hapag-Lloyd Cruises’ Europa 2 will operate a cruise blending light and sound with F&B this August, and will sail the American west coast from Hawaii to South America for the first time in 2023/24.

German composer, musician and music producer Christopher von Deylen, more commonly known under the pseudonym 'Schiller,' will transform Europa 2 into an ‘an audiovisual work of art’ on a cruise from Palma de Mallorca to Civitavecchia between August 12 and 21.

The 1970-born artist, renowned as one of Germany's most important electro-pop music figures, will provide a brand new audio-visual 360-degree experience under the 'ILLUMINATE2' concept. He will be joined by other international artists onboard the vessel in creating the experience.

According to Hapag-Lloyd Cruises, von Deylen will take passengers into ‘a sea of ​​light, colour and sound throughout the West Med,’ for example, by turning Club 2 into a ‘cityscape’ that immerses guests in the urban landscapes of Tokyo, Tehran or Beirut through digitally recorded wall panels integrated into Club 2 during the last shipyard overhaul.

Passengers will be served aperitifs tailored to the respective cityscapes.

Cooperating with Hapag-Lloyd Cruises' executive chef, Michael Hoffmann, von Deylen has also designed an immersive dinner in which audio-visual soundscapes merge with culinary taste experiences. The five-course meal will be served in the Elements restaurant and consist of an interplay of colours, sounds and unique textures to awaken the senses.

The ILLUMINATE2 sailing will include stops in Ibiza, Valencia, Cannes, Calvi, Portofino, Livorno, and Porto Santo Stefano. It will be the first time Europa 2 has called at the latter, where it will anchor August 20 from 7am to 8pm. The small port is located in the Grossetto Province, celebrated for its wine, as well as its unspoiled nature and authentic atmosphere that makes it popular with Italian notables. Long established as a marina for yachts and sailing boats of all sizes, cruise calls to the destination are infrequent with port activities mainly concentrated on cargo and ferry operations to nearby Giglio Island.

Hapag-Lloyd Cruises’ 2023/24 international sailings span 28 routes and are intended to appeal to passengers outside the German-speaking markets.

In October 2023, Europa 2 will for the first time operate a roundtrip New York voyage, calling Boston, Baltimore, Portland and Halifax and more as part of the 13-day programme.

From March to May 2024, Europa 2 will cruise the Hawaiian Islands and the American west coast to South America - another first for the cruise line.

Firsts within Europe include the vessel sailing from Rome along the Amalfi Coast to Tropea, known as the 'Pearl of Calabria' and famous for the sweet red onions named after the destination. An inaugural circumnavigation of Sicily will then take place.

Among other themed cruises in 2024, 'ILLUMINATE2' will return in a format tailored to the international market. Setting sail in August that year, Europa 2 will journey from the Elbe south to the Tagus. Culinary experiences will again merge with a soundtrack for the senses, as von Deylen for the third time brings art to Europa 2 made up of dance, concerts and images.