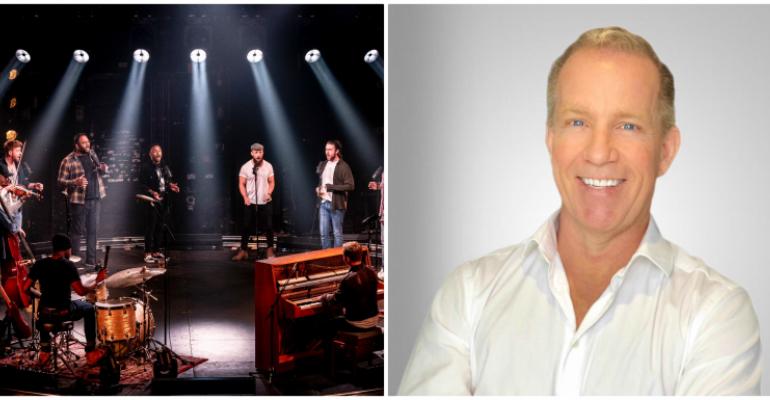 'The Choir of Man' kicks off NCL's 'Embark' docu-series the night of Nov. 19. Richard Ambrose, right, who heads entertainment, said the line's full roster will be revived
For those who wonder if shipboard entertainment will ever be the same again, Norwegian Cruise Line's answer is a resounding yes.

'All the shows are going to be coming back,' Richard Ambrose, SVP entertainment, said Tuesday.

The full entertainment program, from the signature Broadway shows to the intimate cabaret and comedy club acts, will be revived. This includes main-stage favorites like 'The Choir of Man' and 'Jersey Boys,' The Cavern Club with its Beatles tribute shows, 'Howl at the Moon' dueling pianos, Syd Norman's Pour House for live rock 'n' roll and Levity Entertainment Group's top comedians.

Entertainment on the test cruises

Some shows will be delayed four to six weeks, but there will even be entertainment on the test cruises — though perhaps not the full roster. Ambrose said the last test cruise will likely have a theatrical production that's carefully planned and analyzed to ensure health protocols.

One of the most challenging is ensuring that patrons can be safely distanced entering and leaving the theater.

When cruising resumes, there will be more performances of the same show to enable smaller audiences. Every other theater seat will be blocked off, and patrons can't sit directly in front of or behind an occupied seat. (That actually sounds great for sightlines.)

Other things will be unseen by passengers (masks are required backstage), or subtle (when it comes to staging, singers' angles will be slightly repositioned, not in a way noticeable to the audience).

Comedy under the stars

Ambrose is excited that comedy shows will be held outside: 'Our guests like to be out on deck. Can you imagine sailing in the Caribbean, watching a comedian at night?'

Speaking of outdoors, at the line's private islands, Great Stirrup Cay and Harvest Caye, all the musicians and activities will be available. But children will need to stay with parents; the organized youth program will not initially be offered.

On board, The Cavern Club will be 'the same experience, but there likely will be some kind of barrier so our guests can't dance close to the Beatles,' as Ambrose put it. In Syd Norman's, performers won't be able to go into the audience but have to stay on the 'bubble' of the stage.

Performers are eager. During the pandemic, 'The live entertainment industry has been decimated. There's just no work,' Ambrose said. Yet travel restrictions have made it tougher to audition talent and get them to the US for rehearsals.

Australia, for example, is a primary market for male dancers, however NCL's talent scouts couldn't go there for auditions. The Australian government does allow people to leave for work, so the line has tackled the significant red tape to get the performers permission to travel.

Ambrose said 30% to 40% of NCL's entertainment staff on the ships are Aussies, including in technical roles.

Casts and rehearsals in a 'bubble'

At NCL's rehearsal facilities in Tampa, Florida, the line used to have 200 to 300 performers on site at a time, plus the creative team.

'We can't do that now. We have to keep each cast in a bubble,' Ambrose explained. Everyone is regularly tested, and each cast is transferred by NCL-provided transportation from and to their housing. Casts aren't allowed to interact. The costumers work in a bubble, too.

When NCL's full fleet is in operation, there are more than 26  productions and the entertainment department employs about 2,300 to 2,600 people counting performers on the ships, those in rehearsal ashore and those on vacation.

'The employer of choice'

Since live entertainment is shut down shoreside, cruise ship jobs are in bigger demand than ever. 'Now we can be very picky-choosy. Only the best,' Ambrose said. 'The labor market is clamoring for work. They've been unemployed almost a year now.'

Broadway theaters don't expect to open until summer 2021, best case. And who knows about the West End?

'The cruise industry, and especially NCL,' in Ambrose's view, 'is going to be the employer of choice.'

As for the immediate future, on Nov. 19, NCL's highest rated show, 'The Choir of Man,' forms the perfect kickoff to the line's new 'Embark' docu-series.

That's because the neighborhood-pub-themed concept is about togetherness and community, noted Christine Da Silva, VP public relations — things that NCL fans, and everyone, is missing in this distancing era.

The cast was reunited at London's historic West End Garrick Theatre to film a show that will stream at 9 p.m. EST Thursday at www.ncl.com/embark and, later, on demand.

During the filming, the Garrick was the only West End venue with the lights on.

The 'Embark' series is a way for NCL to connect with brand loyalists as cruising's comeback nears. Next in the series, 'The Best of Broadway,' will air in December before the holidays. A variety of behind-the-scenes content — to be announced — will follow.