For Carnival and the cruise industry, 'total focus' on decarbonization: Arnold Donald 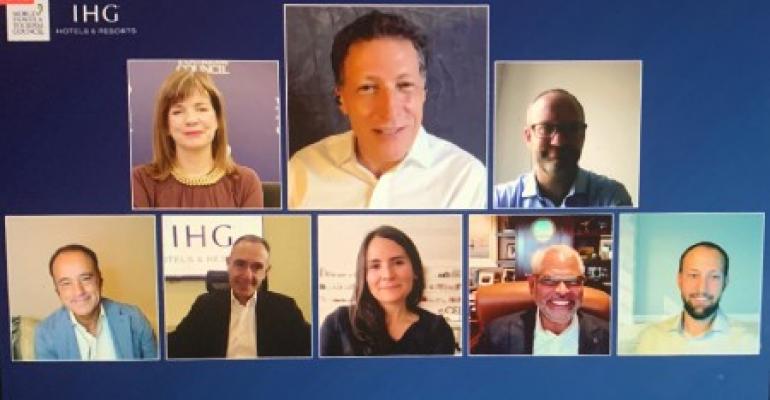 'We can get there. It's going to take technology advancement,' Donald said, pointing to efforts with battery technology, fuel cells and biofuels as examples. 'We could get to zero emissions. And that is ultimately the goal.'

It may seem impossible now, but Donald drew a parallel with dramatic scientific advances during the COVID-19 pandemic. Eighteen months ago, people didn't understand what COVID was, or the epidemiology. Fast forward and there are multiple vaccines, advancements in treatment, and an in-depth understanding of how it's transmitted and the epidemiology.

'So, with science and technology, continued investment and a concerted effort by everyone on the planet, we do believe it's not just an aspiration, it's a very real possibility to get to zero-emission vessels,' Donald summed up.

Not focused on carbon offsets

Offsets can play a role in reducing emissions but Carnival isn't currently focused on those, Donald said, because it wants to get to zero emission.

Though other cruise companies like Royal Caribbean Group, Norwegian Cruise Line Holdings, MSC Cruises and Virgin Voyages use offsets — as well as their own arrays of CO2 reduction efforts — the Carnival chief elaborated: 'We're not against offsets, and ultimately we may have to depend on those, as well, to achieve aspirations we've articulated by 2050 of being carbon neutral. But we're cautiously optimistic we can get there through technologies and invention.

'We'll continue to look at offsets but we have successfully reduced our carbon intensity by 30% since 2006 and we've got the goal of 40% from a 2008 baseline and with LNG and other technologies we continue to strive to dramatically reduce and get to the goals by 2050.'

Panelists were asked to tell, in just one sentence, what they'd like to see in the near future as they work toward net zero.

Donald said: 'While maintaining a sense of urgency, a balanced consideration for progress being made so we don't have abrupt regulations that will cause industries to suffer, lose jobs and disrupt commerce.'

Carnival in 2019 was the first cruise company to join the Getting to Zero Coalition, an alliance committed to accelerating the decarbonization of international shipping. (MSC Cruises recently signed up.)

Carnival built cruising's first LNG-powered ships; it has four, with seven more on order. 'Those don't get us to zero but they're a step in the right direction,' Donald said.

And the company has aligned with the International Maritime Organization's objectives of 40% reduction in carbon intensity by 2030 and 50% absolute carbon reduction by 2050.

Above and beyond IMO goals

Plus, as noted, by 2050, Carnival aims to be carbon neutral. The technologies don't exist to achieve that yet, but Donald expressed 'confidence in the science and partnering with others.'

In another ambition above and beyond the IMO goals, for the 40% reduction by 2030 — which is based on distance, so there could still be some absolute increases, he pointed out — 'Ours is based on capacity.'

Carnival's carbon emissions peaked in 2011; the company's capacity has grown 20% since then but it has managed to cut CO2 by a host of efforts such as voyage planning, better equipment, cleaner fuels and use of shore power.