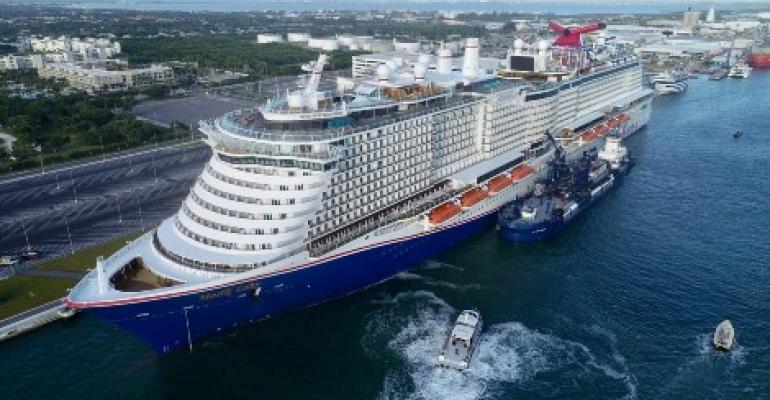 Mardi Gras refuels with LNG at Port Canaveral. It is one of 11 LNG-powered ships that will have joined the Carnival Corp. & plc fleet through 2025

Carnival Corp. & plc aims to achieve a 40% reduction in carbon rate per available lower berth day by 2030, relative to a 2008 baseline, and aspires to net carbon neutral operations by 2050.

The company hopes to build zero-emissions ships by 2050.

These are among Carnival's newly announced 2030 sustainability goals and 2050 aspirations.

'The 2030 goals and our aspirations for 2050 are an important next step in our sustainability journey and support our efforts to establish a path to zero-emission cruising over time,' Carnival Corp. CEO Arnold Donald said.

Carnival confirmed that its absolute carbon emissions peaked in 2011, despite an approximately 20% capacity increase between 2011 and today with an additional 19% capacity increase on order. The company expressed a commitment to continue to reduce emissions over time and to identify a pathway to decarbonization.

Carnival plans to expand its alternative fuels strategy across its LNG program and battery, fuel cell and biofuel capabilities.

Further, the company intends to increase fleetwide shore power connection capability to at least 60% of the fleet by 2030.

During Thursday's earnings call, Donald noted that efforts have continued during the pause in operations, including the installation of food biodigesters which help to mitigate the risk of any non-food waste discharge.

Carnival aims to increase fleetwide coverage of advanced wastewater treatment systems to at least 75% by 2030.

Additional 2030 sustainability goals and 2050 aspirations will be detailed in the company's 2020 Sustainability Report to be issued later this summer.

Carnival leads the cruise industry's use of LNG to power cruise ships with a total of 11 ships that will have joined the fleet through 2025. This will represent nearly 20% of total capacity, including four ships already in operation. The company also took the lead in installing advanced air quality systems (scrubbers) on board its ships and is promoting the use of shore power.

Other initiatives optimize on-board energy use, while innovative hull designs and coatings reduce fuel consumption by minimizing friction. Innovative technologies for generating power are being trialed, including battery power and fuel cells.