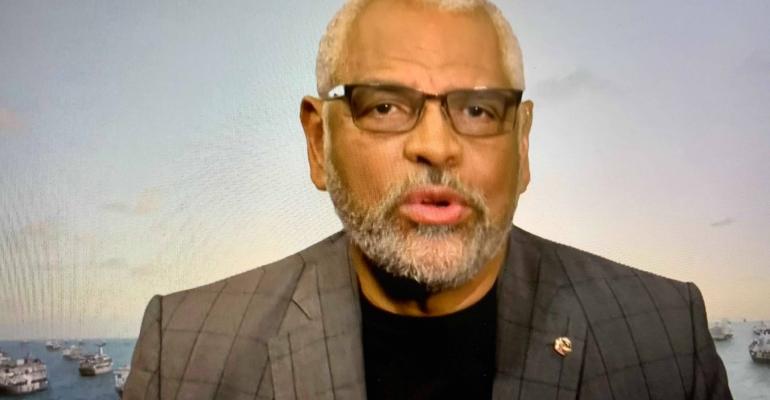 'I continue to be very much focused on working with the CDC and the administration to come up with a solution that works for American workers and the American public,' Arnold Donald said

Carnival Corp. had no bombshell news on US restart plans during today's business update.

CEO Arnold Donald indicated the company will continue working within the CDC process, and said no company-wide vaccination mandate is planned.

'We want to share the optimism that we can all sail in July, and by working together, we think we can make that happen,' Donald said, adding that Carnival is talking with the CDC and the Biden administration, while also sharing the industry's disappointment in the latest CDC cruise guidance.

Responding to a vague CDC statement that cruising may be possible from the US as soon as July, Donald couldn't say whether that would be test sailings or revenue cruises.

Short notice possible but it takes time to crew a ship

Should there be a green light, Carnival could offer sailings on short notice because 'the demand is there,' Donald said. The challenge is ramping up with crew and their training — it would take 60 to 90 days to get a ship ready.

All 30 of the company's ships in US waters are currently in 'green' status.

Reiterating Christine Duffy's remarks of yesterday, Carnival Cruise Line, with its 14 US homeports, would prefer to start up stateside to give 'all the people who depend on the industry for their livelihood, to have those jobs here,' Donald said. 'But if we're unable to sail, we will consider homeporting elsewhere.'

'Trying to hold back' on going offshore

Donald's tone was mild, though. And he said Carnival has no deadline in mind for reaching a decision on whether to go offshore if there's no progress, only that it 'could be sooner rather than later we might have to announce some additional homeporting outside the US.

'We're trying to hold back on that. I continue to be very much focused on working with the CDC and the administration to come up with a solution that works for American workers and the American public.'

Sailings are ongoing for AIDA Cruises in the Canary Islands, planned to restart in May for Costa in Italy and have been announced for Seabourn from Greece and Cunard, Princess Cruises and P&O Cruises from the UK. The nine ships with announced cruises represent 12% of the company's capacity.

Besides its efforts in the US, Carnival continues to work on resuming operations in Asia and Australia, Donald said.

59 of company's ships are outside CSO

The Carnival chief noted 59 of the company's 90 ships are outside the US conditional sail order.

And he stuck with his previous comments that Carnival hopes to have its entire fleet back in service by end 2021/early 2022.

Apart from vaccination being required for the UK cruises with Princess, Cunard and P&O and for Seabourn's in Greece this summer, there is no company-wide or brand policy on vaccination.

Donald encouraged everyone to get vaccinated but noted no major country is requiring it for travel so far, and not everyone has access to vaccines yet, including children. Of course, the company would comply with each country's regulations.

'What our ultimate policies will be, we'll have to let that evolve and we'll see,' he said.