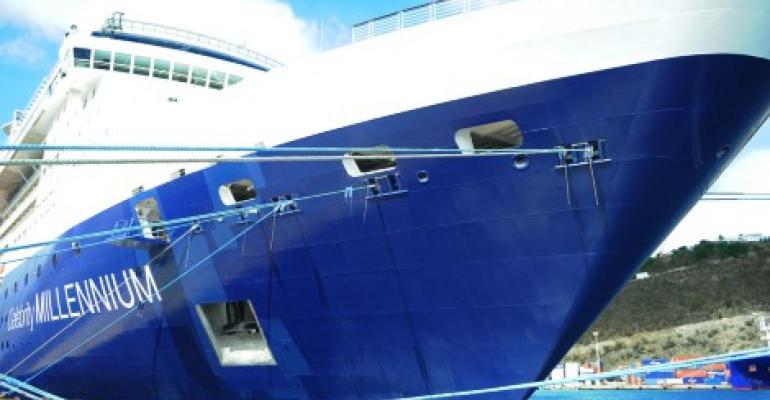 Celebrity Millennium's first cruise was not disrupted following the two positive cases detected during routine pre-disembarkation testing, and no other people on board tested positive

The number of people testing positive for COVID-19 aboard Celebrity Millennium's Caribbean cruise restart remained at just the two passengers sharing a cabin, with everyone else testing negative.

The ship was carrying about 600 passengers, or 30 percent capacity.

Everyone disembarked at Philipsburg, St. Maarten, Saturday, with the two people who tested positive flying home via private air, according to Celebrity Cruises spokeswoman Susan Lomax, who just returned from St. Maarten.

The cruise was closely watched as the first Caribbean sailing since the global shutdown, apart from SeaDream Yacht Club's ill-fated attempt to restart from Barbados last November. Several reporters were on board, and national media covered the departure and what the experience is like now — remarkably normal, aside from the additional pre-cruise paperwork and testing and 'bubble' tours in one port — then, subsequently, the two COVID cases.

However, thanks to Celebrity's vaccination mandate for crew and adult passengers and the effectiveness of the protocols, with no spread beyond the two people, the stories were balanced — even downplayed. For example, The New York Times — incredibly — didn't even mention the two positives in its headline or until the 36th paragraph of the story, and then only in passing.

The ship sails on

Following the two positives, who were asymptomatic, the weeklong voyage was not disrupted, aside from contact tracing with those identified for expedited testing remaining in their staterooms until cleared.

The two positives had turned up Thursday during Celebrity's routine pre-disembarkation testing while the ship was in Curaçao, with a sea day on Friday and arrival back in St. Maarten today. (St. Maarten requires a negative test and so does the US, for all international travelers.)

Earlier, Celebrity Millennium had called at Aruba and Barbados.

The ship sailed again today, with a new group of about 600 passengers embarking. This week's cruise will visit Tortola, St. Lucia and Barbados.

The St. Maarten-based butterfly program is scheduled to operate through August.