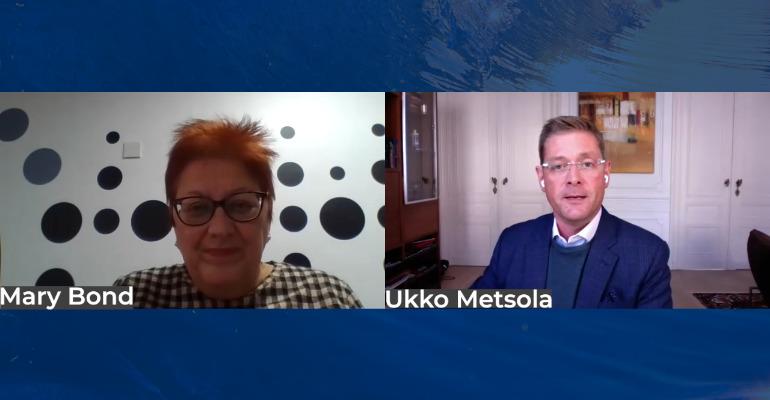 Metsola: Investing in shore power would be my recommendation [to ports] at this point in time
Whilst 2021 is all about cruising’s gradual healthy return to service, the biggest Europe challenge going forward is not related to the pandemic at all but the EU Green Deal and its Fit for 55 legislative proposal, said Ukko Metsola, director general of CLIA Europe.

‘I am optimistic relatively soon we can put COVID-19 behind us,’ he told Mary Bond in a one to one interview during Seatrade Cruise Global 2.0 aired Wednesday.

Solid base to push forward

‘It’s easy to forget just five months ago international cruise calls were banned almost everywhere in Europe,’ said Metsola, ‘but we have achieved a great deal and built a very solid base for cruise lines to unleash that pent up demand in 2022.’

Looking ahead the next big challenge relates to the EU Green Deal and the Fit for 55 legislative proposal which the European Commission published in July.

Metsola called it an 'unprecedented regulatory tsunami’ and ‘in some ways shipping, and therefore cruising, is at the heart of it although this is about many economic sectors – it’s about societal change through which Europe wants to become the first carbon neutral continent by 2050.’

The CLIA Europe executive called this ‘hugely ambitious’ and whilst ‘we don’t disagree with the long-term need to decarbonise, we want to be fully sustainable.’

He continued: ‘finding a pathway that will get us there is an interesting and exciting challenge and we need to make sure alternative marine fuels are developed and made available in combination with other technologies, like fuel cells and shore power which is relevant for European ports as it will require massive investment.’

Part of the Fit for 55 proposal requires passenger ships to have zero emissions when alongside in European ports by 2030, with some exemptions expiring by 2035.

How exactly this legislative process will unfold is still largely unknown and will take a couple of years before the European Parliament comes up with final legislation, Metsola said.

Is providing shore power essential for every European port?

‘Shore power should, ideally, be available everywhere if the EC gets its way and zero emissions for ships alongside gets adopted.

‘There may be other ways to comply. Perhaps we can have alternative fuels or batteries or some other way to run our hotel operations on the ship when it is berthed alongside in a European port; it is not the only solution but certainly the dominating solution,’ he said.

He advised, ‘shore power will have to spread very rapidly and that whole transition needs to be accelerated horrendously and this will take an investment of billions.’

There is an EU Recovery Fund and the EU is handing money to member states for investment, to a large degree in decarbonisation and green initiatives, ‘so I think ports should make sure they get their fair share of any public funding and if and wherever it makes sense, investing in shore power would be my recommendation at this point in time,’ shared Metsola.

Register here for a virtual pass to watch the above and other north Europe, Mediterranean and Red Sea sessions, as well as the entire program from the Seatrade Cruise Global Miami Conference, on demand and to network.