'Enough is enough' — Cruise industry says it's safe, ready to sail from US 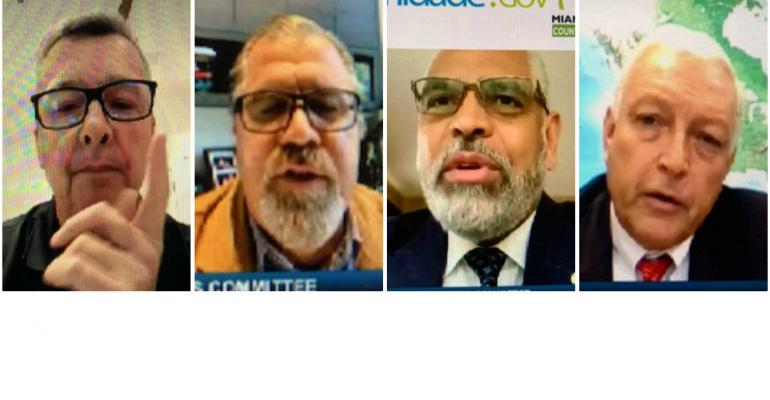 Among those addressing the Miami-Dade County Tourism and Ports Committee were, from left, Michael Bayley, Frank Del Rio, Arnold Donald and Juan Kuryla
Cruise lines are ready to get back to business safely and thousands of jobs depend on that, industry leaders, suppliers, retailers and longshoremen told Miami-Dade lawmakers Thursday.

'The cruise industry is close to devastation. The market capitalization of the three public companies has dropped by nearly $50 billion. We've had to raise $20 billion' to stay afloat, Frank Del Rio, president and CEO of Norwegian Cruise Line Holdings, said.

'It's been more than six months. We as an industry and society have learned a lot about how to live beside COVID,' Del Rio said, pointing to how NCLH and Royal Caribbean Group convened their joint Healthy Sail Panel of experts more than five months ago.

'These are the best people in America, and they have been working for us,' he went on, adding that in the next week to 10 days the companies will submit their protocols to the US Centers for Disease Control and Prevention.

Del Rio voiced confidence that it will be safe to cruise from America, just as a small but growing number of lines are doing in Europe.

'We've been quiet for too long'

The US no-sail order is 'affecting the lives of thousands of employees, their families and their children,' Del Rio continued. 'And yet we see airlines flying. I want someone to tell me how it's possible that COVID-19 doesn't occur on an airplane when you're sitting four inches away from a person ...

'It's unconscionable what's happened to the cruise industry. We've been quiet for too long.'

For his part, 'We are totally committed to working with CDC,' Arnold Donald, president and CEO, Carnival Corp. & plc, told commissioners. 'We have been working nonstop ... to develop science-based COVID-19 protocols to be sure the cruise industry can handle the risks without any burden on local resources.

'We want no one to experience a greater risk on a cruise ship than they would in similar shoreside activities. Historically, we had less risk than shoreside, and that's our goal now as well.'

Illustrating how cruising's shutdown has caused a 'tsunami-like impact' on small businesses, Donald played a short clip of Jerry Kaye, whose Lucite Creations makes signs for the cruise industry. According to Kaye, with 40 years in business, work dried up when the ships stopped sailing. He got choked up as he said: 'If I had to leave [this job], it would destroy me.'

'We are ready to work with authorities in the US. We want to be a significant contributor to supporting restart efforts ... both for people in our industry and the many supporting sectors that work with it,' said Rick Sasso, chairman of MSC Cruises USA. MSC Grandiosa began sailing in Europe in mid-August and is now on its fourth successful cruise.

'The protocols are working'

'Our experience to date shows that cruising can be done safely,' with adherence to protocols and 'going above and beyond the required standards,' Sasso said. 'Guests are enjoying cruises once again and applauding us ... The protocols are working.'

'Miami is the gateway to the Caribbean,' Bayley continued, adding that 40 Caribbean countries count on the cruise business. Bayley co-chairs a task force with Barbados Prime Minister Mia Amor Mottley that's forging a universal set of guidelines to dovetail with those of the Healthy Sail Panel and protocols that lines will submit to the CDC.

'We're ready' to return to service

'It's time that the cruise industry returned to service, and we're ready,' Bayley summed up.

Caitlin Gardner, representing the giant home-based travel advisor network Cruise Planners, argued it's 'unfair to single out the cruise industry,' which should be treated like other businesses such as hotels and restaurants — that are open. 'Use your voice to urge CDC to allow the cruise industry to return,' Gardner told commissioners.

Commissioner Sosa and her committee made it clear they heard the industry's plight and that of PortMiami, where investments in new cruise terminals continue. NCL's 'Pearl of Miami,' Terminal B, sits completed — and empty. New facilities are under way or planned for Carnival Cruise Line, MSC Cruises/Disney Cruise Line and Virgin Voyages.

Sosa repeatedly took the CDC to task for not communicating with the cruise lines and keeping them hanging for months. 'It's unfair that they don't even answer ... Listen to the plans. Correct the plans. Tell them what they need to do,' she scolded.

The CDC has set a Sept. 21 deadline for public comments about ways to safely restart cruising. Sosa said Miami-Dade County will be writing to CDC and to Florida's representatives and senators to press for a quick CDC response to the cruise lines' protocols.

'We are going to pressure the CDC to do the review and come back to us,' she said. Many families' livelihoods, she added, are depending on it.