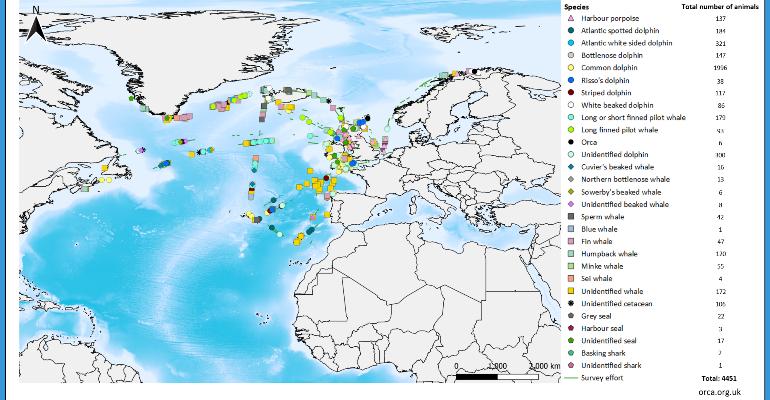 A map showing marine wildlife sightings from on board Fred. Olsen ships in 2022, with data collected owing to its partnership with ORCA

Passengers aboard Fred. Olsen Cruise Lines’ fleet made more than 4,400 wildlife sightings with the help of ORCA last year, as the line again launches more than a dozen cruises in partnership with the marine wildlife charity for 2023.

The animals were detected and recorded as part of ORCA’s Cruise Conservationist programme - a whale and dolphin monitoring project which uses the data collected during cruises to identify and monitor whale and dolphin populations around the world.

The common dolphin was seen most often, 296 times, and the total number of dolphins sighted amounted to 1,996. Also detected were humpback whales, orca, a blue whale and the elusive Cuvier’s beaked whale, which can dive to depths of nearly 3,000m holding the record for the deepest and longest dive of any mammal.

‘These sightings show the absolutely phenomenal range of habitats that our ocean conservationists can study on Fred. Olsen itineraries, monitoring areas that it would be otherwise impossible to reach,’ explained Steve Jones, director of fundraising & operations, ORCA.

‘The data we've collected in 2022 will help give us important insights into the lives of these whales, dolphins and porpoises, and we can understand better than ever the protections they need to safeguard them for future generations.’

James Moss, journey experience coordinator, Fred. Olsen Cruise Lines, described encountering native wildlife as ‘truly special,’ noting, ‘we have a really unique opportunity, as a cruise line, to be able to offer guests the chance to have this experience directly from the deck as they sail between destinations.’

He said the line was looking forward to another year working with the charity, stating, ‘It has been a real privilege to work with ORCA this year, with their team of Ocean Conservationists helping our guests not only to spot marine mammals, but to learn more about the wildlife they spot and to play a part in capturing important data, too.’

ORCA’s cruise conservationists will join a further 16 sailings this year. Highlights of these include: