How TUI Cruises has safely managed operations during the pandemic 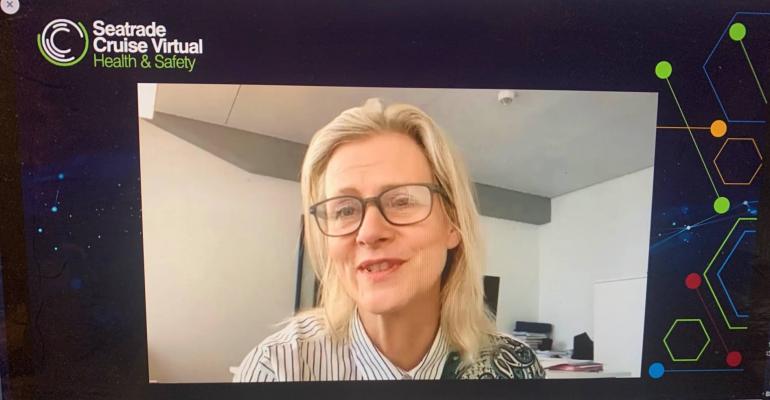 'Some passengers have said they feel safer on board our ships than at home,' Wybcke Meier noted

Protocols have proven effective, operations have gone smoothly, demand is strong and net promoter scores have been higher during the pandemic, Meier said Monday during her opening keynote for Seatrade Cruise Virtual: Health & Safety.

Strong dialogue with officials in Europe

'Some passengers have said they feel safer on board our ships than at home,' Meier noted, adding there's strong dialogue with government and port officials in Europe and there haven't been issues with cruising not being considered a safe form of travel.

A pair of TUI ships are currently operating from Las Palmas in the Canary Islands, and in May TUI hopes to add departures from German ports like Hamburg, Kiel and Bremerhaven — even if just cruises to nowhere initially, and from Greece (Crete), then gradually resuming elsewhere.

'We hope we will have all our ships in operation this year, sooner or later,' Meier said, adding that occupancy will be held to 60% and protocols including testing and masks are expected to remain in place as vaccination is still not widespread in Germany.

After more than 115 cruises, a lot of lessons have been learned, and these will help inform other brands in the Royal Caribbean Group as they prepare to resume. Royal Caribbean Group has also been instrumental in helping TUI Cruises as it developed its healthy safety protocols in conjunction with medical experts last summer and throughout the pandemic.

How the COVID cases were handled

Concerning the COVID cases, Meier said everyone had presented a negative PCR test as required for entry to the Canary Islands, but TUI detected a positive during its own antigen testing. The passenger was immediately isolated and contact tracing initiated while a second antigen test and a rapid PCR test conducted on board confirmed the positive. Four people were isolated and when the ship returned to Las Palmas, they were put into a designated shoreside facility, all arranged by TUI's medical partner as per established procedures.

'There was no outbreak. After detection of the passenger, we were able to go back to our routine,' Meier said, adding that Canary Islands officials saw no need to issue a stop-sail order.

Testing required for re-entry to Germany

Since Germany a few weeks ago mandated a testing requirement for returning travelers, TUI has made pre-disembarkation tests available on board, conducted by the medical staff and at a nominal charge.

With COVID vaccination rates still low in Germany, vaccination isn't part of current protocols but Meier said TUI will follow the guidance of health officials and it may be in future that vaccinated passengers don't have to be tested at embarkation. Regardless, mask-wearing and other on-board protocols will continue.

She has 'high hopes' TUI will be able to start getting crew vaccinated in the coming weeks and months.

TUI still operates bubble excursions and those have worked well for the most part, though during winter cruises in the Canary Islands, at times not every traveler has been able to get all the tours they wanted because the sailings have been so well-booked and the excursions are kept at limited numbers to maintain distancing.

TUI Cruises restarted July 24 with Mein Schiff 2 on 'blue cruises' (to nowhere) from Hamburg, which were fully booked (at 60% capacity), then added departures from Kiel. Next, the company started a bubble program from Heraklion, Crete, using its exclusive chartered flights and operating one-week cruises with three shore excursions. And then the Canary Islands program began. Currently those two ships from Las Palmas are the only ones in operation as TUI looks to a May restart in Germany and Crete.

'We hope from summer on, we will be able to return to service more and more,' Meier said, adding there's certainly no lack of demand; it's only a matter of gaining permission to resume from various destination authorities.