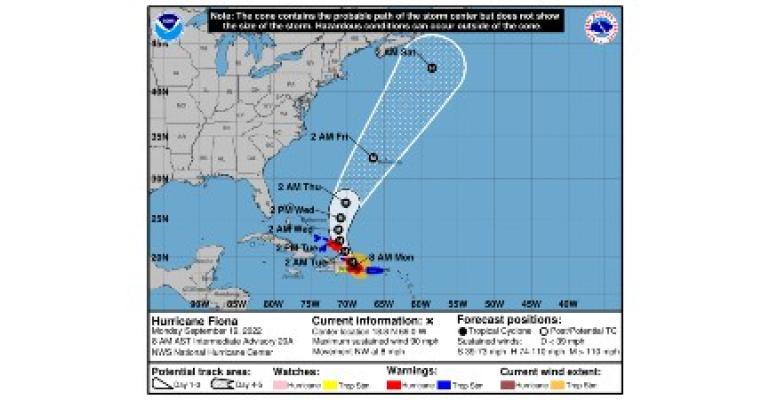 After making landfall at Puerto Rico on Sunday, Hurricane Fiona headed for the Dominican Republic. A handful of cruise itineraries have been revised.

Royal Caribbean International's Port Canaveral-based Harmony of the Seas switched from an eastern to a western Caribbean route. The Sept. 18 voyage called today at Perfect Day at CocoCay and will substitute Costa Maya and Cozumel for St. Thomas and St. Maarten.

MSC Cruises' MSC Seashore also changed from an eastern to a western route. The Sept. 17 weeklong cruise from PortMiami will visit Cozumel, Roatán and Costa Maya. MSC Seashore called at Ocean Cay on Sunday instead of this coming Friday, as originally scheduled.

Carnival Legend's current eight-day cruise that sailed from Baltimore Sept. 17 will visit Nassau instead of Grand Turk on Wednesday and Bimini in lieu of Amber Cove (Dominican Republic) on Thursday.

Carnival Freedom's current five-day cruise from Port Canaveral will spend Tuesday at sea instead of visiting Grand Turk. A stop at Freeport will be added on Wednesday.

On Puerto Rico high winds and heavy rain produced flash floods and urban flooding, along with mudslides and landslides in areas of higher terrain. Most people are without power. San Juan's Luis Muñoz Marín Airport opened with some flights back on schedule.

Dominican Republic and Turks and Caicos

According to the National Hurricane Center in Miami, Hurricane Fiona's maximum sustained winds on Monday morning were near 90 mph/150 km/h, with higher gusts. 'Some strengthening is expected during the next few days after the hurricane emerges over the southwestern Atlantic, and Fiona is forecast to become a major hurricane by Wednesday,' forecasters said.