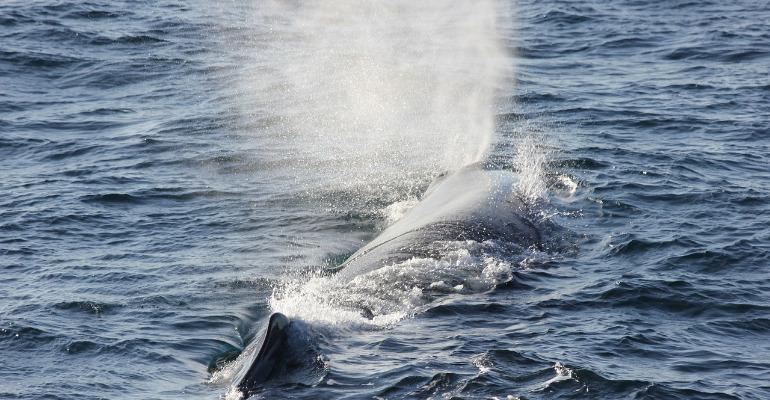 Only 200 to 300 sperm whales remain in the Eastern Mediterranean

MSC Cruises will reroute its ships sailing to Greek destinations between mid-April and October in order to reduce the risk of harm to the Eastern Mediterranean’s vulnerable sperm whale population.

The decision, which extends across the MSC Group, came after a coalition of NGOs comprising the International Fund for Animal Welfare, OceanCare, the Pelagos Cetacean Research Institute and WWF Greece with the support of the WWF network urged the company to redirect their vessels away from the whales’ habitat.

Only 200 to 300 sperm whales are estimated to still exist in the area.

‘Committed’ to the initiative

‘MSC Cruises is committed to supporting the health of our oceans and working closely with experts in the field to identify and implement meaningful action is how we can best do this,’ said Linden Coppell, director of sustainability, MSC Cruises. ‘We are pleased to support this initiative, recognising that with small changes in our routings we can support the conservation of this important sperm whale population.’

On the brink of extinction

More than half the sperm whales found stranded along the Greek coast show evidence of collision with vessels — the highest proportion of deaths known to be caused by ship strikes in the world, with most incidents proving fatal.

Evidence from other areas suggests only a small proportion of ship strikes are detected and reported, with mariners on large vessels often unaware the event has taken place.

Dr. Alexandros Frantzis, scientific director of the Pelagos Cetacean Research Institute which has been studying the Eastern Mediterranean sperm whale population since 1998, fears the species is on the brink of extinction: ‘The whales found dead on the shore with propeller marks and cuts are just the tip of the iceberg,’ commented Frantzis, ‘up to 20 times more die offshore and are never recorded.

‘We are also seeing fewer whales in our yearly research surveys than in previous years, which is a huge concern. It is our fear that without urgent action, deaths through ship strikes will cause this already small population to go extinct very soon.’

Sperm whales belong to the group of toothed whales and can dive to around 2000mtr, grow up to 20-mtr-long and can weigh up to 41t.

Studies by the Pelagos Cetacean Research Institute, spanning more than two decades, have identified the Hellenic Trench west and south of the Peloponnese and southwest of Crete, as critical habitat for sperm whales. Found there year-round concentrated around the 1000mtr depth contour, it is the only area where family groups have been observed in the Eastern Mediterranean.

‘By making small re-routing changes, MSC [Group] is making a significant difference for these endangered whales,’ stated a spokesperson for the NGO coalition. ‘This population is at risk and even one ship strike is one too many.

‘Now we need other shipping companies to show similar leadership — if all ship traffic using this area made these minor adjustments, the ship strike risk to sperm whales would be reduced by almost 75%.

‘Ship re-routing is required now to change the course for sperm whales in the Eastern Mediterranean.’

Action by the Greek authorities

Earlier this year, the Greek Ministry of Defense through the Hellenic Hydrographic Office — in collaboration with the Ministry of Maritime Affairs and Insular Policy and the Greek shipping industry — issued an official notice informing mariners about the presence of marine mammals in the Hellenic Trench.

The NAVTEX warning instructs mariners to look out for whales to prevent collisions.