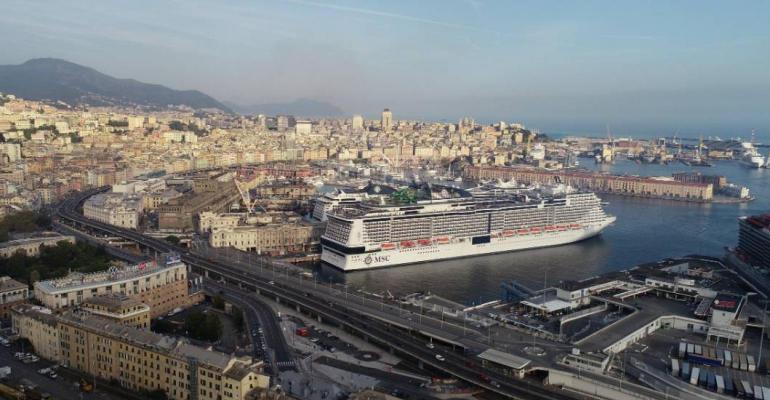 MSC Grandiosa has embarked its second weeklong cruise from Genoa. On Sunday a young man tested positive, resulting in 15 people denied boarding including his family and those who'd traveled in a van with them

MSC Grandiosa turned around in Genoa Sunday at the end of its first cruise, which was very closely watched as the first big ship to resume sailing in Europe.

'Everything ran smoothly, both in terms of disembarkation from the first cruise and embarkation for the next one,' a company spokesperson said.

The Aug. 16 cruise embarked from Genoa with only around a thousand guests on a ship that has capacity for 6,334 passengers. About 90% were Italians, with the rest from France. More people embarked at Civitavecchia (Rome), Naples and Palermo, while Valletta, Malta, was purely a transit call.

MSC has resumed with what are, arguably, the toughest protocols of any line to date in that they mandate testing at embarkation for all (on top of any destination testing requirement) and they allow shore visits only via an MSC excursion — that goes for passengers and crew. (When Costa Cruises restarts in September, it's also going to require swab tests and that anyone going ashore takes a Costa excursion.)

On Saturday while MSC Grandiosa was en route back to Genoa from Valletta, all passengers who went ashore in Malta took the mandatory test required by the Italian authorities prior to re-entering Italy. All tested negative. This indicates MSC's protocols are working, since nearly all of these individuals had been on board since the first day.

During the embarkation screening in Genoa Aug. 23, a young man tested positive, both via the first antigen screening and the follow-up molecular test.

As a result, he and family were denied boarding. So were other travelers — 15 in total, including the young man and his family — who had journeyed to Genoa by van together with them.

'Other than that, life on board during the first and the early phases of the next cruise ran smoothly,' the spokesperson said. She reported passengers frequenting the specialty restaurants, cafés and shops aboard MSC Grandiosa. Many of the shore excursions offered were sold out, she said.

During the first cruise, it was widely reported that one family broke away from the organized MSC tour in Naples. They were denied boarding.

Also, according to Cruise Week, three people who were joining the cruise in Naples tested positive during the antigen screening. Local regulations required the follow-up molecular test to be done by health authorities in Naples and the ship could not wait for the results, so those three and their traveling companions (who tested negative) were left in Naples, in isolation, with the option to join the ship in Palermo the following day if the results were negative.

Cruise Week said the three tested negative but they and their party decided not to embark at Palermo.

So it's been an encouraging start for MSC Cruises, whose protocols also include a contingency response plan should a suspected case be identified on board, in cooperation with national health authorities. The suspected case and close contacts will follow isolation measures and may be disembarked according to local and national regulations.

Given the prevalence of coronavirus in society, how lines handle a case or cases is as critical as their prevention protocols.