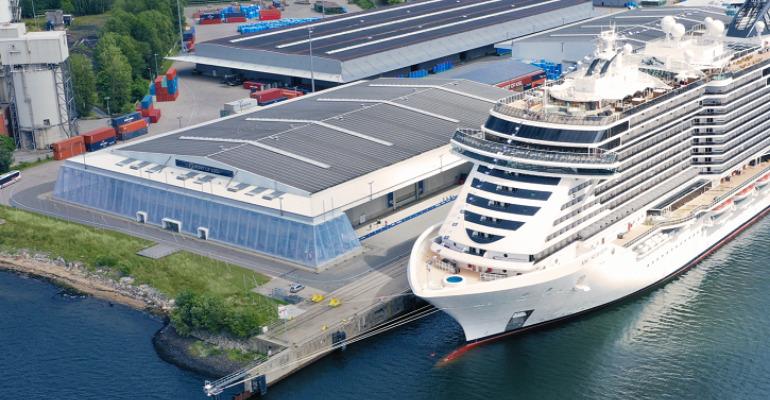 MSC Seaview docked at Berth No 1, where in late 2023 shore power will become available

The Port of Kiel will install a new shore power plant for cruise ships at Ostuferhafen with work commencing this autumn.

The winner of the EU-wide tender went to Siemens in a €17m deal specifying two new plants to be built, one of those being a 50/60 Hz shore power plant for cruise ships.

Three ships to be supplied at Ostuferhafen

Kiel's current infrastructure allows up to three vessels docked in the city centre to be supplied with shore power, including one cruise vessel at Ostseekai.

The first of the two shore power plants to be installed at Ostuferhafen will supply up to two ferries or cruise ships; connections can be established at four different berths, including the cruise-destined Berth No 1. The plant’s output comprises 16 MVA, supplying cruise ships and ferries with a frequency of 50 or 60 Hz and a voltage of 6.6 kV or 11 kV.

The second shore power plant with a 50 Hz frequency is designed exclusively for RoRo ships.

In total, the two shore power plants will supply up to three vessels at a time, including one cruise ship.

Ostuferhafen, located outside Kiel's city centre, used to be a cargo and RoPax ferry dock until the rebuilt Berth No 1 with adjacent cruise passenger pavilion became operational in 2014. Berth No 1 has since developed into an important part of Kiel's cruise infrastructure, which is especially suitable for turnaround calls by large vessels and used regularly by MSC Cruises.

The Port of Kiel aims to be climate neutral by 2030 and, according to its MD Dirk Claus, cold ironing plays a vital role in achieving this. Claus says he hopes ‘once the supply infrastructure for up to six ships has been brought in place, up to 80% of all vessels calling Kiel may take shore power while docked as from 2024-25.’