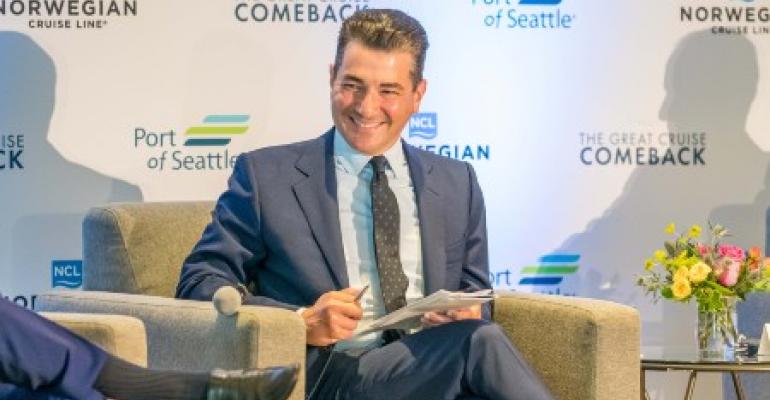 Cruises are 'an environment where you can very confidently calculate the risk,' Dr. Scott Gottlieb said
In two or three weeks, Omicron will have peaked and people should feel confident cruising this summer, Dr. Scott Gottlieb told travel advisors in a Norwegian Cruise Line Holdings briefing.

Given vaccination rates, immunity and therapeutics, the most likely scenario is low prevalence of COVID-19 in the summer and fall, in Europe as well as the US, according to Gottlieb, COVID-19 advisor to NCLH, former FDA commissioner and Pfizer board member.

This bodes well for Europe and Alaska cruises, which are in their critical wave season sales period. Gottlieb noted he's planning a family cruise for summer and he has young children.

NCLH still expects to have its full fleet in service by late spring, President and CEO Frank Del Rio said.

A controlled environment, versus other congregate leisure activities

Cruises are 'an environment where you can very confidently calculate the risk,' Gottlieb said, because lines test so extensively and are required to report cases. However, COVID on ships attracts public and media attention since cases aren't tracked in airports, hotels, restaurants, theme parks and other congregate leisure activities.

The fact that some cruise ships had outbreaks early in the pandemic is 'not an easy narrative to shake,' Gottlieb acknowledged.

However, he continues to believe cruising is a leisure activity that 'lends itself to implementing measures that can tightly control the risk you're taking, that this could be a safer vacation than going into a hotel or a city where you really have no control over the environment you're in. You have no way to measure the risk and you don't have ready access to care should you need it.

NCLH investments in therapeutics and testing

Gottlieb said NCLH had invested heavily in therapeutics and high-quality testing. Its three brands continue to have a full vaccination mandate.

'We take no chances. We fight the good fight,' he said.

Omicron has peaked in US East and West coasts

Omicron cases are coming down on the US East and West coasts, though the Midwest and Southwest are some weeks behind and still face the worst.

People will feel much safer this summer, Gottlieb predicted. It's also possible that a vaccine booster in the fall will not only reduce the severity of illness but restore the ability to prevent transmission, something that hasn't been as effective with Omicron.

Gottlieb expects this to be the last wave of COVID-19 infection, barring some 'black swan' event, adding he'd mistakenly thought the same about Delta. But circumstances are different now, and there's more consensus among virologists and epidemiologists that another major strain is probably not lurking out there.

He does worry about countries with low levels of immunity — China, most of all, where there's scant immunity outside of Wuhan and a less effective vaccine.

'You would expect this is the final year of the pandemic,' Gottlieb said. COVID would then become epidemic, like flu, probably a seasonal matter and perhaps even less prevalent than flu thanks to vaccination, testing and therapeutics. That would mean 'It won't dominate our lives in the future.'

'We've endured two years of this monster and now is not the time to quit,' he said.