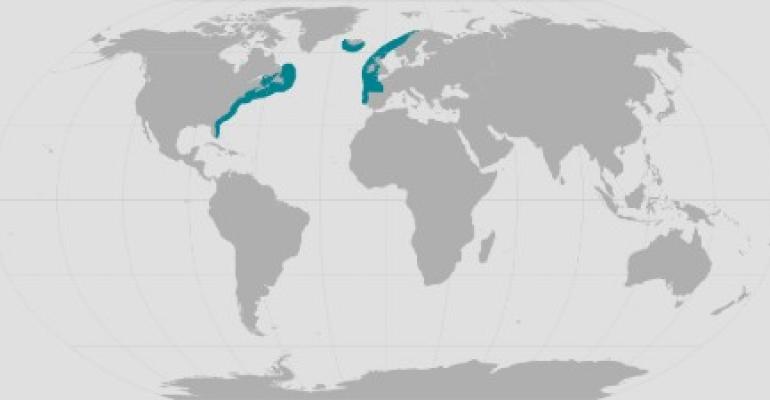 This NOAA chart shows the habitat of the endangered North Atlantic right whale. It is believed that fewer than 350 remain

The changes would broaden the zone of seasonal speed restrictions — which in the US currently stretch from Maine down the Eastern Seaboard to south of Georgia — further south, including Central Florida.

The speed limit would newly apply to most vessels 35 feet and longer, instead of 65 feet and over previously.

The agency has documented 51 right whale serious injuries and deaths in US and Canadian waters since 2017. NOAA said vessel strikes and fishing gear entanglements are the primary cause.

'When ships come up the channel, they sometimes have to exceed 10 knots in order to maintain safe steerageway making the turn into the harbor,' he told Wednesday's Canaveral Port Authority commission meeting.

'It's going to impact a lot of people ... not just big ships, the general public is going to be affected,' Murray added, citing offshore fishermen with fast boats that head out to the tuna grounds.

The 10-knot cap in the new zone encompassing Canaveral would run from Nov. 15 to April 15, and extends five nautical miles offshore.

Ben Borgie, co-chair of Canaveral Pilots, called the restriction a 'big deal' that will have a 'dramatic impact.'

'As a result of having to slow down these cruise ships, not only does that add an extra level of danger to the operation, it also means this 10-knot speed is going to apply to our pilot boats,' Borgie said. He explained that if a ship and pilot boat are going the same speed, they can't make the pilot transfer.

'This means we won't be able to bring in four cruise ships in one hour. We'll have to spread them out. That means we'll be boarding those cruise ships at 8, 9 in the morning. This is a big, big problem for us operationally.'

Borgie, who blasted the changes as 'total federal overreach,' said he's sounding the alarm with recreational and commercial fishermen and harbor pilots across the expanded zone, and will ask Tallahassee to use its clout at the federal level.

Commissioners asked about lobbying NOAA but Murray said the course of action for proposed rulemaking is to submit comments, which Canaveral will be doing, and he urged other stakeholders to act as well.

For 30 years he's been part of a Brevard County volunteer group that he said spends thousands of hours scanning the coast for right whales. It's a 'big deal' when a right whale comes to Brevard: 'Everybody's all excited. It's in the newspapers. It's on TV. I can't believe a right whale has slipped by in the last 40 years that we didn't know.

'It's insane' that NOAA would extend the zone 'this far down,' McLouth argued. 'If we get more than two or three right whales here ... it's really an unusual situation.'

Commissioner Micah Loyd said: 'It's like they're making the entire Atlantic ocean a manatee zone.'

Borgie warned that getting caught breaking the 10-knot speed cap is a violation of the Endangered Species Act, with potential criminal liability.

'We love whales, too, but this is just untenable to the point of being navigationally unsafe,' he said.

Public comments due by Sept. 30

The proposed rulemaking was published in the Federal Register Aug. 1, with public comments invited by Sept. 30.