HomeNewsEnvironmental & HealthStill a chance US cruising could resume in 2020, Donald says
Recent
Recent News
Onboard Media touts locally made products on Carnival ships in Alaska
May 24, 2022
NCL moves to nine ships in Europe this year with Sun redeployed from Asia
May 24, 2022
AmaWaterways unveils savings for Mekong return in October
May 24, 2022
NCL’s Ben Angell new chairman of CLIA Australasia
May 24, 2022

Still a chance US cruising could resume in 2020, Donald says 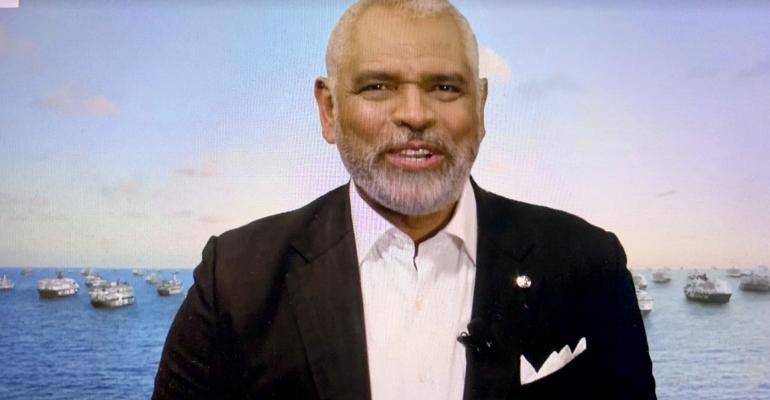 Arnold Donald is pictured during a recent Bloomberg interview

With seemingly no end to coronavirus community spread stateside, prospects for US-based cruising in 2020 appear to grow dimmer by the day.

But Arnold Donald isn't ruling it out.

'It's definitely possible we could sail again in 2020 from the US,' said Donald, president and CEO of Carnival Corp. & plc, in a one-to-one interview with Seatrade Cruise News.

'If you go back just two or three months, who would have thought there would be any possibility of cruising in Italy? ... Now Italy is cruising again. They've mitigated the spread. Society is starting to move about. Is it too soon? Is it premature? Is it perfect timing? We'll all know that a month or two from now.'

So much has been learned, though, about the virus that Donald thinks it 'very plausible, based on what I see elsewhere in the world, that we could be sailing in 2020 from the US. But we have to prepare, of course, that we may not be able to.'

There's demand, he insisted. If cruising from the US were allowed, 'a whole lot of people would sail right now.'

Keeping in touch with Caribbean leaders

Donald continues to personally check in with Caribbean leaders, whose top concern is protecting their citizens' health, he said, and, after that, keeping their economies going. They want travel and tourism to resume and are working together to come up with protocols via CARICOM and other collectives.

'We're trying to provide science and medical information to help them make the determinations they need to make for their citizens and make sure our guests are going into a safe environment,' Donald said.

Fortunately, the Caribbean has very little community spread of the virus.

Many assume cruise lines will initially stick to their private island destinations.

In Europe, MSC Cruises and Costa Cruises mandate swab tests for all. Royal Caribbean International President and CEO Michael Bayley recently suggested testing is 'very much at the front' of thinking in protocols for Caribbean cruising.

That could happen, Donald agreed, and tests are currently required before flying to the Caribbean. But he cautioned things are fluid, so it's also possible that tests won't be a must for cruisers.

'We're preparing for all possibilities. We're constantly monitoring developments. We're looking at all the technologies and things in the approval process. We have to look at the entire protocol. The objective is to mitigate spread. So a lot depends on what you're doing in the rest of your protocols.

'The smart thing to do is be prepared and follow what makes the most sense at the moment.'

A major concern about cruising

Recently Alex Sharpe, president and CEO of Signature Travel Network, said clients' biggest concern about cruising is repatriation — not being able to return from a cruise and potentially being locked out of the US if something happens.

'That's a nonstarter,' Donald said, and a very important aspect.

'We're going to do everything to mitigate spread. But here's a practical reality: If there's community spread, chances are, no matter what you do, eventually there will be a COVID case on board. So, it's important that we're prepared for that. We don't want ships held up, thousands of guests not being able to disembark because there's a possible COVID case or a confirmed COVID case on board. The guests need to be comfortable that we've worked out with every destination we visit how that will be handled.'

Within the Carnival family, AIDA and Costa are restarting in Europe, and MSC and TUI Cruises are other big-ship brands already underway there. Donald said protocols like allowing people ashore only on the cruise line's own excursions make a lot of sense at this point in time. But, as with mandatory testing, it's hard to say if those things will apply when the US can sail.

By then, there may be better testing, or even a vaccine.

What will guide decision-making, he stressed again, is the level of community spread, in both the source markets and the destinations, and the latest science. It's the entire protocol that reduces risk, not just one or two elements.

The goal is that cruisers would be 'at no greater risk than if they were doing similar activities shoreside. Our aspiration is that there's less risk on a cruise than shoreside.'

And compliance, wherever the company operates, is vital. Currently there's a heightened focus on consistency in reporting, a challenge since different jurisdictions require different things. But consistent reporting will help cruising restart sooner.

When will cruising resume in China? In Australia?

China is now focused on opening travel within the country, and the Chinese are monitoring the global situation. They don't want to import COVID.

As with China, the incidence of community spread is low in Australia and almost nonexistent in New Zealand. So sailing there is 'definitely a possibility for Australian nationals and New Zealand nationals' still this year, he thinks, even though major brands have just further suspended service — Princess Cruises and Carnival Cruise Line into December and Royal Caribbean and Celebrity to November. That is just the start of the southern hemisphere cruise season, though.

Carnival is invited to listen in on the Royal Caribbean Group/Norwegian Cruise Line Holdings' joint Healthy Sail Panel, and MSC and others have their own batteries of experts.

According to Donald, 'When we all get together at [Cruise Lines International Association], that's a whole lot of perspectives coming into play. The industry collectively is doing a pretty thorough job of really digging into the science and medicine behind all this. So that will be a powerful collection of [knowledge] when we pull it all together. Whatever we learn, we will share with everybody.'

The US Centers for Disease Control and Prevention is expected to take an industry approach so there's not a patchwork of protocols.

Donald considers the public rulemaking process constructive: 'Any time a regulatory body takes input from everyone to consider as they go about doing their work is a good thing. The concept of listening to all parties and all perspectives is a smart thing to do.'

Meanwhile, most cruise ships have left US waters. A great number were used to repatriate crew. More than 80,000 Carnival Corp. crew are now home, an amazing accomplishment considering closed borders and the lack of air service. Fewer than 1,000 crew remain scheduled for repatriation; several hundred come from countries where the borders remain shut even to their own citizens.

For Donald, 'It's a very intensely active time. We are incredibly busy tending to the ships, the business and, most importantly, the people.' He's engaging with governments around the world and overseeing financial transactions as Carnival takes myriad steps to shore up liquidity.

With high joblessness and recession sparked by the pandemic, the macroeconomic environment is another obstacle.

Yet Donald feels cruising has leg up as 'one of the greatest vacation values there is. For a lot of people, it's a very affordable way to enjoy a vacation. So that's very positive.'

And as ship travel resumes, it's not like turning on a light switch with all destinations opening at the same time.

'We can regulate the reintroduction of capacity and make certain it's aligned with the reintroduction of travel. We'll start with a much smaller supply ...' And less efficient vessels are exiting. 'For a period of time, while the economic situation will definitely impact us, we've got those offset things,' Donald said, and he emphasized there's demand for cruising right now, which is only going to increase as COVID-19 is mitigated around the world.

Since there were leadership changes at Holland America Line and Seabourn, the exit of four HAL ships and possible reputational damage to Princess Cruises for being in the global spotlight early on in the pandemic, it would seem the Holland America Group faces special challenges.

Donald said that's not so.

Despite the wide reporting linking cruising and COVID, according to research by several entities, cruising's reputation has 'stayed above the trough' in public opinion following incidents in 2012 and 2013.

'The brands are solid,' Donald said. 'They were doing great before COVID, and they'll do fine after. There are a lot of loyal guests for those brands. We just all have to work hard to get those people who never cruised.

'Well get there. The good news is we don't have to get there right away because we'll have fewer ships sailing anyway.'