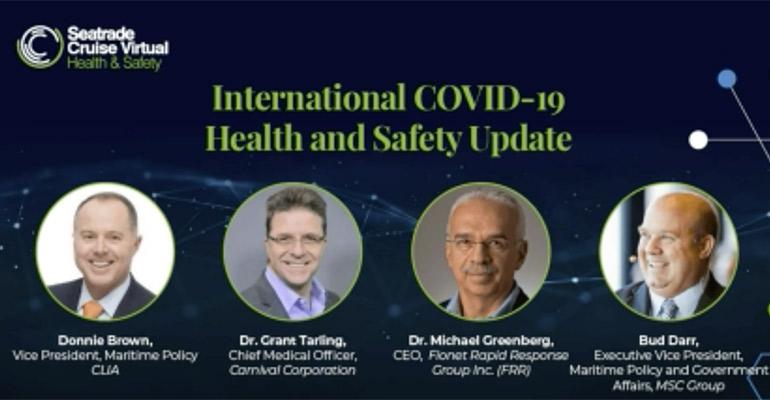 The panelists endorsed a multilayered approach, made up of testing and vaccine requirements

He went on to outline the ‘triple testing’ of crew — one of the health and safety measures adopted by the cruise company — which sees testing of crew from the aircraft, at embarkation and days before they exit their quarantine period.

As he went on to characterise Carnival as being ‘now in to the “exit game,”’ focussing on testing and disembarkation of passengers and crew, Michael Greenberg, CEO, Fionet Rapid Response Group, emphasised the importance of testing in a changing world, ‘Just because the last big one [pandemic] was 100 years ago doesn’t mean the next one is going to be… There will be outbreaks at an increased level.’

‘We’re incredibly encouraged by the vaccines,’ Tarling added, as he commended the variety of vaccines emerging. Nonetheless, he regarded the future of cruising as needing a ‘multilayered’ approach, which blends vaccination with testing.

He commented, ‘We’ve learnt some things are more effective than others… we’ve modified them along the way.

He also presented the process adopted by MSC Cruises before its resumption, from bringing in ‘an outside consultancy… to build out protocols,’ to utilising EU Healthy Gateways guidance, EMSA guidance, as well as MSC’s independent blue ribbon panel of experts to inform safety protocols.

The role of the the US Centers for Disease Control and Prevention was another topic explored by the panelists during the discussion, with Tarling noting the absence of engagement by the CDC when it comes to requesting the cruise lines' data, given the ‘hundreds and thousands’ of passengers sailing with AIDA and Costa brands since operations restarted.

In contrast, Darr noted that the CDC has ‘engaged’ with MSC Cruises and received the cruise line’s data on its operations since last summer.