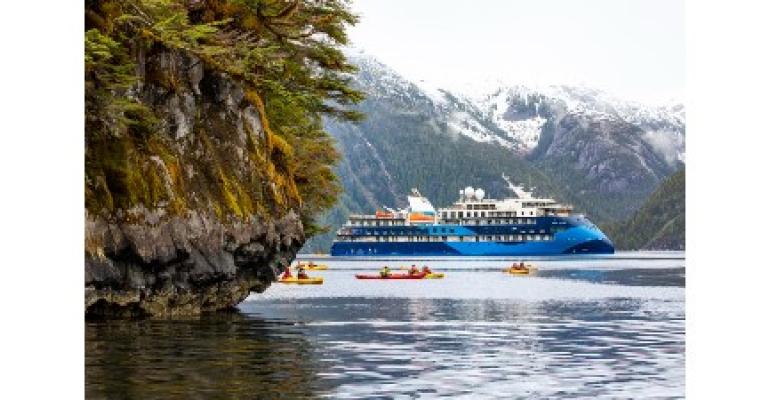 On a Zodiac trip around Sucia Island in the Pacific Northwest, American Queen Voyages founder and Chairman John Waggoner was in his element.

A marine biologist by education, Waggoner takes special interest in assuring the new expedition program aboard Ocean Victory is rich with science under the guise of AQV's 'encounter' travel, delving deeper into the destinations and getting to know the local people. 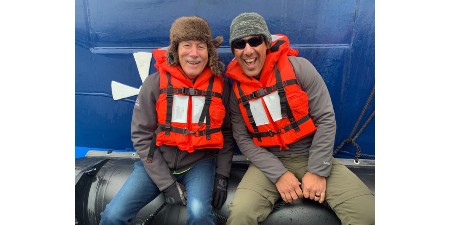 John Waggoner, left, and Brendan Applegate on a Zodiac

Part of this is having students from California Polytechnic State University, Waggoner's alma mater, aboard for the inaugural Alaska season among Ocean Victory's deep expedition team, which includes seasoned experts in a wide range of fields, from geology to whale communications. The team, which can number 18 on some voyages, even has an expedition photographer and an expedition musician.

On the Zodiac with Waggoner and passengers, Caleb, a Cal Poly student, retrieved a long, thick ribbon of bull kelp from the water, tearing off a piece to munch on as he explained this marine algae is a source of nutrients for many species.

Two professional expedition leaders in the same boat included the US Coast Guard-licensed Zodiac captain, who on a very windy day with plenty of waves and spray, expertly steered closer to harbor seals as they popped their heads out of the water and near stellar sea lions splayed across a sandy islet. Caleb pointed out Brandt's cormorants, common murre, guillemots, oystercatchers and Canada geese. 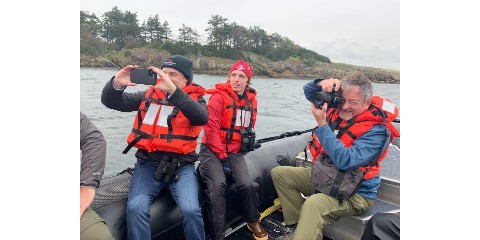 Sucia's shores are dotted with dotted with islands, whose rock is primarily sandstone carved into intriguing curves and formations. Caleb talked about the flora, including madrones, trees with distinctive orange-red flaky bark.

Chilled and damp but exhilarated, the explorers hopped from Waggoner's Zodiac, and others, back aboard Ocean Victory where Hotel Director Bertrand Petyt surprised them with cups of thick, rich hot chocolate.

It was the ideal cap to a preview of the adventures that would come in Alaska, where the ship is just now completing its inaugural trip for American Queen Voyages. 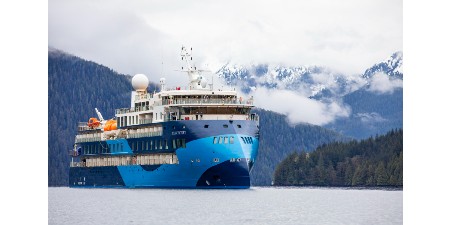 Ocean Victory with its distinctive X-BOW

In Ocean Victory, American Queen Voyages has a ship perfectly crafted for its trademark 'encounter' travel. It carries only 186 passengers and is small enough to duck into the less-trafficked harbors and coves mapped out by Alaska expedition experts David Giersdorf, AQV's newly named acting president, and Michael Bennett, who together crafted the itineraries.

Its distinctive X-BOW is not only eye-catching, it provides a smoother ride, less vibration and reduced noise.

'This vessel is quiet and hopefully as we sail up the coast it will have a much smaller acoustic footprint,' said a scientist who's part of the Sound Science Research Collective led by Dr. Michelle Fournet, which has a partnership with AQV that will send experts on whale acoustics to enrich the Alaska season. They'll drop hydrophones from Zodiacs so passengers can hear the whales, give informative briefings and conduct research that that travelers can participate in.

The collective is studying the impact that underwater noise from ships has on whales' ability to hear each other and communicate.

Petyt, a luxury cruise veteran — and it shows in the finesse of his team's many thoughtful touches and service refinements — experienced huge waves aboard Ocean Victory in Antarctica (where the ship operated for a different charterer).

'It's a ship made for extreme weather,' he said, recounting 10.5-meter waves, 'and it was amazing. The X-BOW cut through the waves. It was stable.'

In Alaska, Ocean Victory will frequent 'small places. It's all about discovery, exploring the wildlife and about learning,' Petyt said. 'We'll be bringing Native story-tellers onboard. I have been to Alaska, but this is different.'

Ocean Victory carries 18 Zodiacs, sea kayaks and other exploration tools. The spacious Expedition Lecture Room is fronted by large flatscreens, with smaller ones positioned throughout. Just steps away are two viewing platforms, one on each side of the ship. 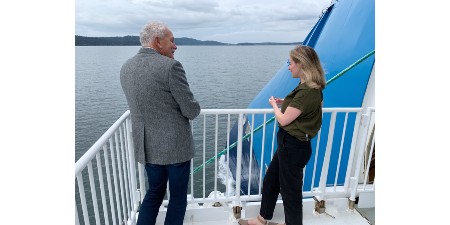 These are essential since Ocean Victory doesn't have an observation bow. Because they're directly over the water, they afford stunning views. They are Waggoner's favorite perch onboard.

'When you get near a pod of killer whales or dolphins, you are right over the water,' he enthused.

Waggoner was looking forward to the daily Zodiac and kayak trips ahead in Alaska. And one more thing — he aimed to squeeze in a fishing trip with the thought of asking the noted chef Regina Charboneau, AQV's culinary ambassador who also was onboard for the inaugural voyage, to cook the salmon or halibut he hoped to hook.

Fresh Alaska seafood is not just for the boss but will be available to all Ocean Victory passengers — though they don't have to catch it themselves.

According to David Kelly, EVP, American Queen Voyages, salmon, king crab and other delicacies will be featured when available in a continuation of the company's philosophy of sourcing local bounty when operating on the rivers and in the Great Lakes.

Aboard Ocean Victory, a king crab boil may be held on the upper deck around the pool with indoor-outdoor seating at the alternative Panorama Restaurant with its big, drop-down windows that can be opened in fine weather. This casual venue typically serves a menu similar to the main dining room and has an evening prime rib carving station.

On a 10-day Alaska trip, there may be two or three nights of special deck barbecue events. 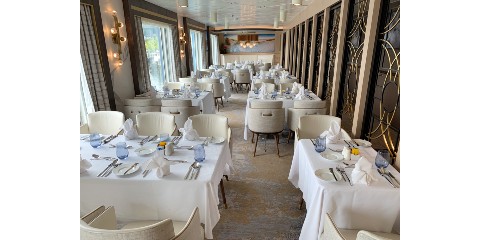 A wing of the elegant main dining room

But the gracious main dining room is casual, too — as suits expedition cruising, Kelly said. However, passengers will find elevated service there and throughout, consistent with the AQV experience on the lakes and rivers 'so what we're known for resonates across all seven vessels.'

Its an 'elegant expedition experience,' Kelly said, unlike the 'rough and ready' family-style dining on some expedition ships. When there's a buffet at lunch, waiters assist, carrying plates to the table. The hors d'oeuvres and canapes are a step above, such as scallops or melon and Parma ham with little vials of injectable sauce.

Besides a hot drink when alighting from a chilly Zodiac trek, there will be hot face towels, and 'Having the hotel director there or the captain or the expedition director to greet guests back is key,' Kelly said.

One of his favorite luxurious touches is the heated bathroom floors in all accommodations.

But this is not a formal ship, with no formal attire required. 'If you been out on a Zodiac all day and you're cold and wet, we want you to come home, get showered and go to dinner comfortably,' Kelly said. 'If you meet people on a Zodiac, you can join them for dinner. The venues lend themselves to being social and having a good time.'

'They're really good partners,' Kelly said, adding: 'We get on phenomenally well with Dietmar [Wertanzl, president and CEO, and a luxury cruise veteran].' CMI sent Peyt, the hotel director, and Albert Kropp, its VP hotel operations, to ensure Ocean Victory gets off to a smooth start. 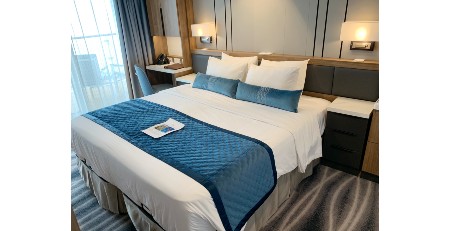 AQV charters newbuild Ocean Victory for the Alaska season from CMI sister company SunStone Ships, and Kelly had the opportunity to influence the vessel's style and decor. China, mattresses and bedding match that on other AQV vessels, and 'Dietmar appreciates I'll spend money to give guests the good, plush experience we're known for.'

Kelly's also pleased with the stellar expedition team AQV has assembled, led by the highly experienced Peter Szyszka, director, and combining Alaska hands with decades of field knowledge and expertise with the fresh-faced Cal Poly students thrilled with the opportunity to work and conduct research on an upscale cruise ship.

'The team is gelling real well together. They're all very excited,' Kelly said.