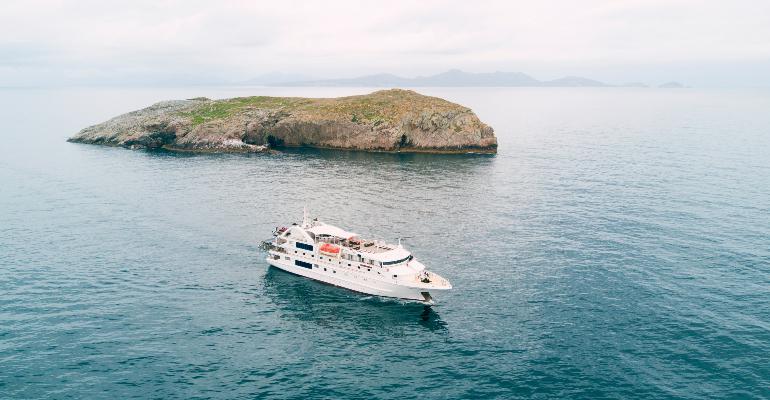 Coral Expeditions will operate 12 Tasmania voyages between January and March - a record number of sailings by the cruise line to the island state.

The cruises will serve a total 800 passengers who will be presented with opportunities for coastal trekking, golfing and cycling.

‘Our style of small ship expedition cruising with low numbers and high conservation values is the perfect model for Tasmanian cruise tourism.’

According to the commercial director, by the Australian operator homeporting in Hobart for the season and provisioning the ship from local suppliers in Tasmania, it will result in the regional economy gaining close to $10 million this year.

The season launched with Coral Adventurer making a series of stops in the Apple Isle - including Stanley, historic Hobart, Bruny Island, Maria Island and Flinders Island – as part of its 60-day ‘Circumnavigation of Australia’ voyage.

Coral Discoverer is currently operating Coral’s first 16-night ‘Tasmania Circumnavigation’ voyage of the season with 70 passengers on board. It is the eighth consecutive year that the ship will homeport in Hobart, for a season that incorporates two 'Tasmania Circumnavigations,' two 'Coastal Wilds' and two 'Coastal Treks' expeditions. Passengers joining the ship’s Tasmania voyages will hear expert talks and commentary by guest lecturers about the heritage and culture of the archipelago and learn about its flora and fauna.

The ship will remain in Tasmania until late March.

Coral has limited availability on its 2023 'Coastal Treks' itineraries and is taking bookings for its 2024 and 2025 seasons.

As well as being able to taste fresh Tasmanian produce, wines, and artisanal spirits, passengers will encounter views from the vessel of the highest sea cliffs in the southern hemisphere: the 300-metre-high dolerite columns of the Tasman Peninsula.

New themed charter voyages are planned, including a golf voyage bringing passengers to courses on King Island (Cape Wickham & Ocean Dunes), both golf courses at Barnbougle and the two courses in Hobart over the eight-day expedition in February 2023.