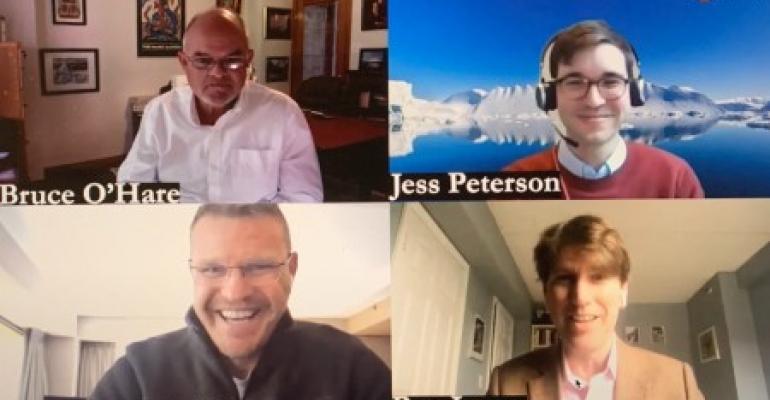 'There is life beyond the polar regions,' said Conrad Combrink, SVP expeditions, turnaround operations and destination management, Silversea Cruises. When Silversea branched into expeditions in 2007, it always planned to go beyond Antarctica and the Arctic — and it's done so, for example, by exploring West Africa's Gulf of Guinea more than a decade ago.

This takes time and resources, though. Silversea spent three years working with Bangladesh before going there, and it's put considerable effort into South Africa. Expedition cruises with their largely self-contained operations are a 'foreign concept to many countries ... We need to educate the different countries, communities and ports on what is an expedition,' Combrink said.

With Silversea's focus on wildlife, natural history and culture, he cited opportunity for year-round expeditions in the Indian Ocean, in the Pacifc Ocean's Micronesia and the North Atlantic's Macaronesia.

'We see huge potential for expansion in non-polar regions,' agreed Jess Peterson, VP product development, Hurtigruten Expeditions. His company recently announced programs in West Africa and its archipelagos — the Bissagos Islands and Cape Verde. And Hurtigruten has curated year-round expeditions in its home country, Norway, which offers 'a lot of cool products' but it takes work with local communities and suppliers to ensure unique experiences.

'We'll continue to be largest operator in the polar regions by berths, but the next decade is about continuing to grow beyond,' Peterson said.

For this expansion, Hurtigruten will use a mix of ships — its own in Central America when redeploying between Antarctica and Alaska and new vessels and partnerships such as that with Ecuador's Metropolitan Touring and its Santa Cruz II in the Galápagos.

One emerging expedition destination is the Great Lakes.

'What's old is new again,' said Bruce O'Hare, Lakeshore Excursions. A century ago, every Great Lakes port had two or three ships. Though passenger shipping faded, a handful of smaller cruise vessels have frequented the region.

What's booming now is expedition operators coming to deploy their kayaks, Zodiacs and rigid inflatable boats for exploration, particularly along the wild Canadian North Shore of Lake Superior. Viking Expeditions is an important new operator, and its Viking Octantis will be the largest Great Lakes expedition ship. SunStone Ships' various charter clients, such as Vantage Travel with its new Ocean Explorer, will be in the Great Lakes next year. And Ponant and others.

The Great Lakes will be a crossover destination, O'Hare said, attracting both classic cruises to its great cities and big draws like the Rock & Roll Hall of Fame but also expedition ships that can go to small fishing villages or uninhabited islands with no port infrastructure needed.

'That's a game-changer for us,' he said.

On the Canadian side of the Great Lakes, the authorities have OKd the use of ships' landing craft on uninhabited islands. The US, though, forbids that.

When Lyons asked if non-polar regions can ever equal the revenue of the poles, Combrink said no. 'Your operating margins will never be the same' because of higher operating costs (port fees, pilots, etc.). And demand may be 'quite soft though we see a lot of demand driven by our past guests. This is an opportunity to travel to a destination they might not have otherwise considered.

'So there's increased demand, but not like the demand for the polar regions,' Combrink summed up. And promoting one-off places is costlier so 'Destinations need to do their part to help market themselves.'

The Great Lakes destinations, he added, have been doing a 'phenomenal job' of educating and engaging the cruise industry. The next step is marketing to the public.

But O'Hare — whose company markets more than 25 ports via such efforts as its itinerary planners' webinar series and makes sales calls to lines along with the Great Lakes Cruise Association — said he doesn't expect much support for consumer marketing from either Canada or the US.

The region has particular appeal now, though, by offering 'safe, close-to-home cruising' for North Americans while, for Europeans and such lines as Ponant, it's a 'place of discovery.' O'Hare cited a starting price of $15,000 for a seven-day Ponant cruise.

'Yes, there are costs, but the ability to attract a high tariff in the Great Lakes is there,' he said. 'Most cruises are sold out.'

According to Peterson, the ideal destinations have a mystique that makes people want to visit, and the lines then promote how they can fulfill that desire.

Combrink pointed to the success of the 'Incredible India' campaign as creating such mystique.

As expedition cruising grows and branches out, crowding in some destinations may become an issue. O'Hare could see capacity restraints in some Great Lakes ports in future years so continuing to develop new ports is key.

'We need to make sure we're welcome in the places we visit,' Peterson said. There's a 'perception that we're autonomous — we use local partners to make sure money is staying in that community.' For example, Hurtigruten could operate its own kayaking trips in New England but it uses local operators instead.

Register here for a virtual pass to watch this and other sessions, as well as the entire program from the Seatrade Cruise Global Miami Conference, on demand and to network.