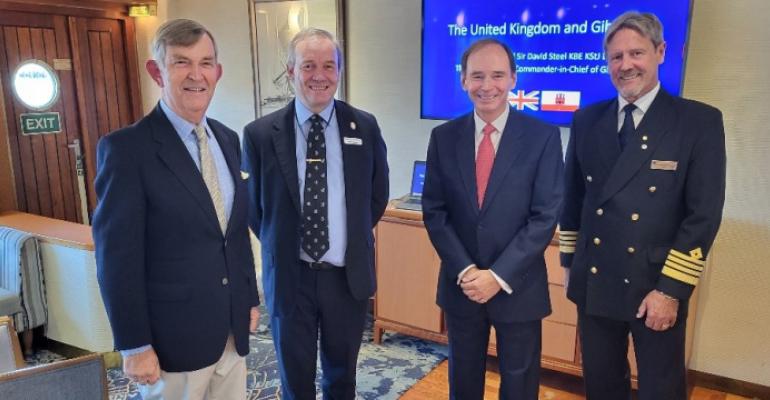 Noble Caledonia welcomed the governor of Gibraltar aboard expedition cruise vessel Hebridean Sky when she visited the port on Wednesday.

Vice Adm. Sir David Steel KBE, DL was welcomed onboard by Capt. Ulf-Peter Hansen-Lindstrom and Noble Caledonia Head of Fleet Operations Mike Deegan who together showed him around the ship before the governor delivered a passionate talk about Gibraltar to passengers.

After the talk, Steel met many of the travelers at a drinks reception before he was hosted for dinner with guests in the main restaurant on board.

Deegan said the governor found a former colleague from his time as the UK 2nd Sea Lord and an old shipmate from his time in the Royal Navy amongst the guest list.

‘Noble Caledonia often punches above its weight as an operator of small ships and we were deeply honoured to host His Majesty’s representative in Gibraltar aboard our ship,' Deegan said. 'Over dinner he was very interested to hear about the specifics of the expedition cruise sector and was also interested to hear, as an ex-seafarer himself, how we address the welfare of our crew members.’

After the governor disembarked, the ship sailed from Gibraltar for Casablanca in Morocco.