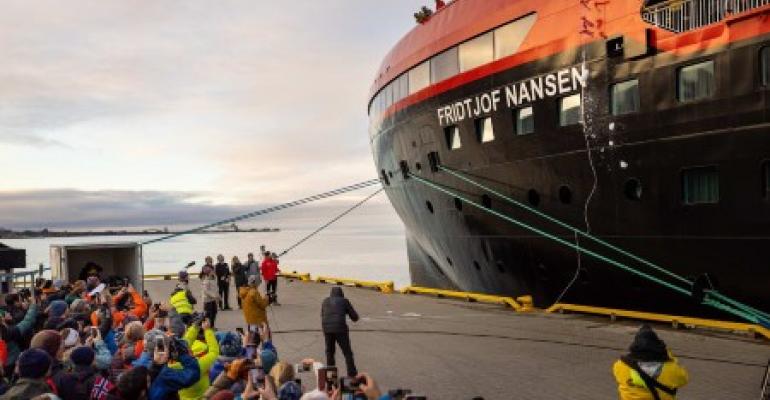 The festivities took place at latitude 78˚ North. Svalbard is where Hurtigruten founder Capt. Richard With began expedition cruising in 1898.

'We are thrilled to celebrate more than 125 years of exploration and adventure travel where it all began,' Hurtigruten Group CEO Daniel Skjeldam said.

As Sørby and Strøm crushed the ice against the hybrid battery-powered ship’s bow, they quoted Amundsen’s words from when he named polar ship Maud in 1917: 'It is not my intention to dishonor the glorious grape, but already now you shall get the taste of your real environment. For the ice you have been built, in the ice you shall stay most of your life, and in the ice, you shall solve your tasks.'

Hearts in the Ice

The traditional godmother gift was also replaced by a joint donation to local projects by Sørby and Strøm’s Hearts in the Ice project and Hurtigruten Foundation.

Added Capt. Bent Ivar Gangdal: 'We are thrilled to welcome guests on board MS Fridtjof Nansen to co-explore the remote corners of the globe with us and wholeheartedly committed to explore in the most sustainable and respectful manner.'