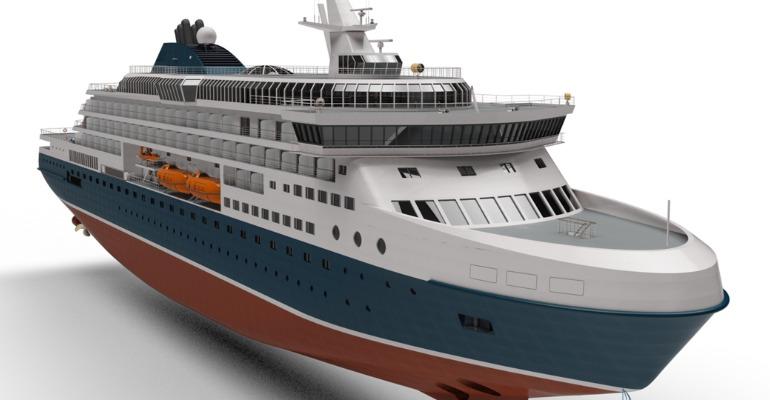 A lithium-ion battery bank can power the vessel while dockside, preventing port emissions.
Marine consultancy Knud E. Hansen has unveiled its design for a 144 mtr long vessel, suitable for up to 300 passengers.

It can operate in solid multi-year ice 1,8mtr thick, and has a 17 knots service speed and 8100 nautical mile range in open water.

The vessel contains a bar/lounge, multi-purpose lounge, library, gift shop, observation lounge, fitness room/spa including a panorama ice bar, as well as a pool and jogging area. Most of the 150 cabins have private balconies with ocean views and have the company's Flex Cabin System installed, which allows for cabin walls to be reconfigured between sailings to convert a single, luxury suite into two separate cabins.

Also included is a dedicated cargo hold with overhead hatch and davit system for stowing and deploying special, expeditionary cargo in remote locations along the cruise, and a large tender garage for stowing zodiacs and other expedition equipment, which can be launched through a shell door on the port side.

There are two service lifts and three passenger lifts providing access to all accommodation decks, and a large helicopter deck can lower a landed helicopter onto a hangar on the deck below.

The vessel is powered by a diesel electric propulsion system and two azipod-units, each 7.5mw. Six installed generators will have a combined power of approximately 23mw, fuelled by a combination of MDO and LNG.

Knud E. Hansen reports to have designed the vessel with ‘special attention’ to MarPol regulations and the Polar code; a lithium-ion battery bank can therefore power the vessel while dockside, preventing port emissions.

It is SOLAS compliant and adheres to Safe Return to Port (SRtP) requirements through the inclusion of redundant, segregated power and propulsion systems, as well as passenger safe havens and an auxiliary wheelhouse.