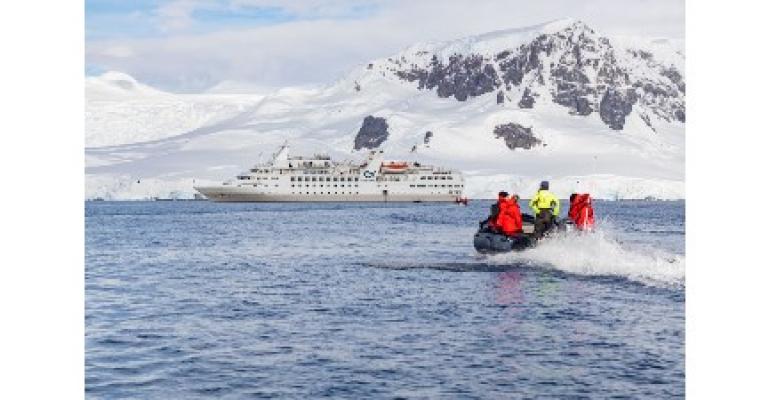 Fifteen months ahead of Exploris One's first cruise, its concept and 2023/24 season were detailed at a Paris news conference.

'Exploris is the result of several years of work, as we had started searching for a ship before the pandemic,' said Videau, the president. 'But it is first of all a project which gathered passionate people, who share the same values and come from the same maritime environment, essential for embracing such an adventure.'

Videau, co-founder and former president of Ponant until 2016, has gone on to form Exploris with some 15 associates, but he is not a major shareholder.

'We used a similar financial scheme as initially for Le Ponant [quirat], in 1989. Therefore, we don’t have any investment fund or prominent financial players,' he said.

Silver Explorer was acquired in November 2021 for some €25m and is still sailing on bareboat charter for Silversea Cruises until November 2023, when it be reflagged to France. Built in 1989 at Rauma Yards in Finland as Delfin Clipper, it sailed under more than half a dozen other names before helping Silversea's foray into expedition cruising, initially named Prince Albert II. It was refurbished in 2008 and 2018.

There will be a 'French update' but no big renovations are planned, Videau said. 'We wanted a small ship, under 200 passengers. Exploris One’s capacity will be reduced from 140 to 120 passengers in polar regions, to allow all of them to access all destinations at the same time. There will be 101 crew members.

Planned for a very exacting type of navigation and with a hull certified 1A ice class, certified, the seven-deck ship has 72 all ocean-view cabins and suites ranging from 15 square meters to 67 square meters. Public rooms include observation and panorama lounges, a large lecture room/cinema with bar, a boutique and a spacious dining room.

French the sole onboard language

'Understand, explore and transmit is our motto,' Videau said of the product that will be exclusively French-speaking. 'We want to give our passengers a unique, enriching experience and favour a human approach to expedition cruising. A common language and a warm environment are for us the best medium to share knowledge and emotions with and between our passengers, woth carefully selected guides and specialists, as well as officers and crew members.'

'But it won’t be ostentatious. Exploration and safety rank first,' Videau said. Antarctica cruises also include a night in a five-star hotel in Buenos Aires and domestic flights.

'We want to sail with total respect to all these destinations and leave a minimal impact,' said David Blouin, director of marine pperations and corporate social responsibility. The company will eschew heavy fuel oil for MDO and MGO. The air conditioning system has been fully updated.

'We'll use water-saving devices, LED lighting and will publish our carbon footprint as well as offsets,' Blouin continued. 'We also have a range of very concrete commitments for the planet and for all crew or staff.'

Some 30 seven- to 17-night cruises are planned for 2024, of which 26 are nonrepetitive, according to Isabelle Vareille, EVP cruise operations & programs. They will visit 117 destinations, 100 of those expedition-dedicated, 'never forgetting that we are visitors, not invaders,' she said. As for the guides and specialists onboard, 80% will have experience in exploration, 60% in polar zones.

'With one naturalist guide for 10 passengers in polar regions and one for 12 passengers on other expedition cruises, we offer a much better ratio than regulatory standards. We are also to work with local guides, offer communities education opportunities and welcome interns for a tourism training,' Vareille said. Local crafts will be favoured in the boutique.

Starting on Dec. 23, 2023, Exploris One’s first cruise will sail from Valparaíso to Patagonia, then head south to the Antarctic and end at Ushuaia. After a trans-Atlantic voyage via the Brazilian islands of Ilha Grande, Tinharé and Fernando de Noronha, the ship will chart Senegal, the Bijagos, Cape Verde, the Canary Islands, Madeira and the Azores. Paying calls at Portugal, Spain, France, the UK and Ireland, Exploris One will then spend its next months between Norway, Spitzberg, Iceland and Greenland, before visiting the Canadian Arctic, Labrador and the St. Lawrence River then returning to South America.

France, Belgium, Switzerland, Luxemburg and Québec are the targeted markets, with some 3,500 passengers expected to be carried in 2024. Charters are also an objective, according to Sales Manager Corinne Renard.

'The concept of an all-French company, with an intimate, boutique ship and a high-quality product is very well-received,' she said. Reservations are open on the Exploris website.