In Focus: Seatrade Cruise Virtual Expedition Cruising
brought to you by 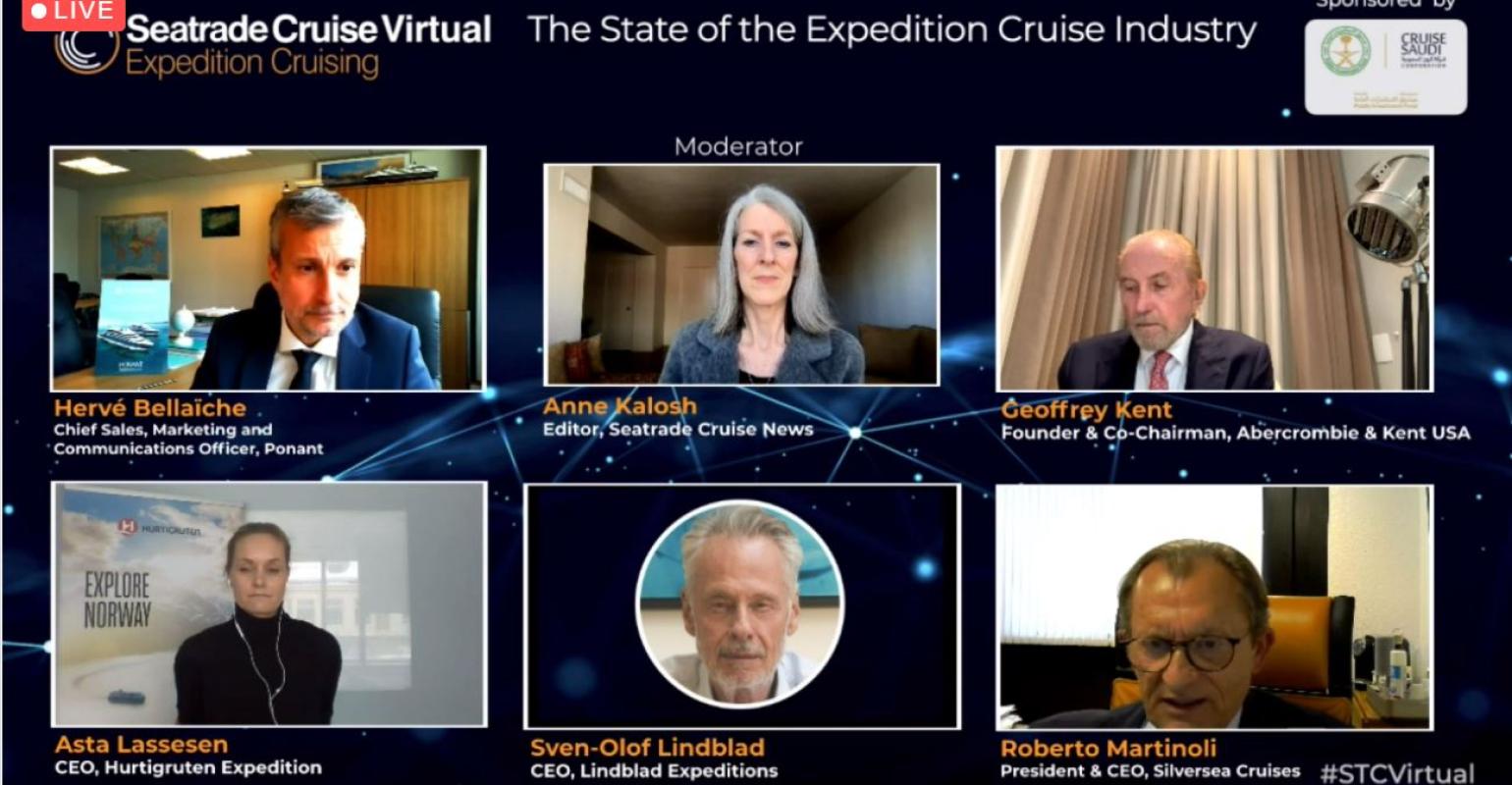 Expedition cruising is poised for incredible supply growth — 14 newbuilds and four repurposed ships set to join in 2021 alone — yet it's a time when most destinations remain off-limits.

'Bookings for 2022 and 2023 are looking really good. People can't wait to be back out on the water,' especially older travelers, said Roberto Martinoli, president and CEO, Silversea Cruises, during Seatrade Cruise Virtual's State of the Expedition Cruise Industry keynote Monday. 'My sincere hope is that when governments lift restrictions, there will be enough demand to fill ships with very short booking windows. And we are ready for that.'

27 newbuilds down the pike

From 2021-23, 27 newbuilds and four repurposed ships from 18 operators are forecast to join the expedition sector at a value of nearly $4bn, adding 7,300 lower berths and 140% more passenger capacity.

As Martinoli sees it, 'The expedition rush is not just a temporary trend' because returns are the highest in cruising, and the sector draws people who might never think of cruising while also advancing the industry's technology and sustainability efforts.

'There's a hunger for what we do,' said Sven Lindblad, CEO, Lindblad Expeditions, explaining that a growing number of people want to experience nature and many are concerned about natural areas vanishing.

'The pandemic will have only increased the interest in this sector,' he said.

'Everyone who goes always comes back and says that was way better than we expected. So I think there's an unlimited market,' added Geoffrey Kent, founder and co-chairman, Abercrombie & Kent Group of Companies. 'The great thing about our industry is you can take a dream and make it happen for the ordinary person.'

Guest satisfaction higher during the pandemic

Ponant operated about 65 cruises in 2020, though only at 30% occupancy, but Hervé Bellaiche, chief sales, marketing and communications officer, said guest satisfaction scores were much higher than usual 'even if they had to wear masks, distance and take PCR tests, sometimes multiple times during the cruise.'

Bellaiche cited 'tremendous demand,' even now, with most customers keeping their money with the company instead of seeking refunds when cruises are canceled.

According to Bellaiche, there's capacity to carry just 300,000 passengers a year on expedition cruises, versus the 29m cruisers overall. He thinks the normal 8% a year demand growth could double in future years.

And the market is changing, broadening. 'My clients are now 45 to 65 and multigenerational,' Kent said.

'As an industry we are driving that change,' said Asta Lassesen, CEO, Hurtigruten Expeditions. A lot of people are interested in the key elements of the product — active travel, nature, wildlife, cultural interaction and sustainability — and this widens demand.

How and where will expeditions resume?

'What you need for opening is three things: medical solutions, a welcome mat — the authorities saying OK — and guests agreeing to your plan,' Lindblad explained.

'There's a lot of optimism with the vaccines and it's one advantage for us with smaller ships,' he added. Lindblad wouldn't be surprised to see vaccination mandates for crew and guests. (In the expedition sector, so far only Victory Cruise Lines has come out with that, while Crystal Expedition Cruises will require it of passengers and Swan Hellenic, the cew.)

'Vaccines seem to be the solution to our problems,' Martinoli agreed. 'Guests are likely to be vaccinated sooner' due to their age. 'Crew are more of a challenge.'

Also a challenge: Expedition operators typically visit remote destinations, where medical capacity may be lacking. And current health protocols mandate shoreside arrangements in the event of an outbreak.

'For small communities, we as operators have a big responsibility to ensure we are not exposing these communities to the virus,' Lassesen said.

The panel gave their current assessment of expedition destinations, with Martinoli quipping there's so much uncertainty that lines are at 'version 28 of their return-to-service' plans, plus it's not known how health protocols may change as a result of vaccinations.

Yet operators see some bright spots.

Will there be Arctic cruising?

With the Arctic season fast approaching. Norway and Svalbard are closed but decisions could be coming soon and Lassesen hopes there could be opportunity to visit later this summer.

The Russian Arctic is 'a big question mark' and the Canadian Arctic is out of the question, Lindblad noted, while Iceland cruises are 'possible' and he hopes Greenland might consider allowing ships even if they can't visit populated areas.

'I would gladly pay the Greenland government a substantial entrance fee to come in without visiting communities,' Lindblad said, urging 'imaginative ways' to approach things.

Bellaiche expects ships will be able to sail this summer around France, in Greece (currently closed but perhaps opening mid-May), Italy, Croatia and Spain, and perhaps the UK, however with restrictions.

Lindblad plans to sail its US-flag ships in Alaska, which is off-limits to foreign-flag operators though lawmakers are pursuing solutions.

The Galápagos could provide the perfect safe 'bubble,' in Martinoli's view, but travelers still have the challenge of getting to Ecuador.

Ponant, recently disappointed by the short-notice inability to operate New Zealand cruises, is more hopeful about Australia opening for small ships, Bellaiche said, since domestic operations are underway there. As for the Kimberley, it depends.

At this point, everyone expects Antarctica cruises to start in the fourth quarter as scheduled, Martinoli said, since vaccines should be widely distributed by then.

Adding value to the destinations

Lindblad advocated for adding more value to the destinations visited. This takes effort.

'How do you best create an interaction that benefits both the guests and the community? It's more than buying a few trinkets,' he said. 'You need a deeper understanding; you need to integrate it into your plans. Our responsibility is to not just come and go, hit and run.'

'It's the license to operate,' as Lassesen put it, adding that Hurtigruten invites communities into its planning.

As a result, Hurtigruten sources food and beverages all along the Norwegian coast and hires guides from Greenland, Lindblad has a Galápagos Island Relief Fund and A&K's longtime philanthropy addresses health, education and conservation in destinations.

Martinoli identified expedition cruising's biggest challenge as branching out beyond the Arctic and Antarctica since other areas are not as profitable or in demand.

'Saudi Arabia's definitely going to be one,' according to A&K's Kent, citing allures like spectacular Red Sea diving. Other places he sees with potential: Japan, Greece, the Baltics and Australia's Kimberley.

Hurtigruten is looking at the Mediterranean.

And it's imperative not to crowd the pristine polar places.

With all the supply growth, Sven Lindblad's worried about ships scrambling for Antarctica's limited landing sites and warned that in future, just one landing per day may be allowed.

In building its latest ships to a high Polar Class 5, Lindblad Expeditions can 'get away from the herd,' he explained, sailing to places 'earlier, later and deeper ... With PC5, you can go further, open territory.'

Ponant's PC2 Le Commandant-Charcot will be able to break ice up to three meters thick and can go 'almost anywhere,' Bellaiche said. The new ship's North Pole cruises are fully booked. The challenge will be sourcing LNG for this one-of-kind, LNG-powered, hybrid electric vessel.

With more ships coming, manning is a focus, and expeditions require special skills and training.

'We are currently recruiting for expedition senior officers, and we are glad to see a lot of demand,' Lassesen said. To do so, companies need to be proactive, acknowledge the officers' value and demonstrate how important they are for product delivery.

And, when it comes to expedition leaders and staff, Hurtigruten is building a structure to offer fixed contracts — unusual in this sector.