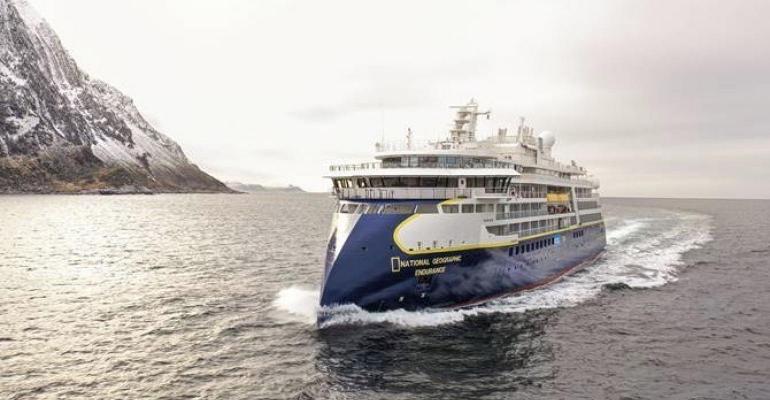 Most other Antarctica expedition operators had already taken the same decision. The season would typically be getting under way now and go until March.

Lindblad had crafted a 'bubble' program with charter air and planned to send its newest ship, National Geographic Endurance — which sits alongside at Ulstein Verft in Norway, where it was delivered in March.

But the challenges were too great, CEO Sven Lindblad explained.

Off-limits to US travelers

Argentina, Chile and New Zealand — all potential turn-around points for Antarctica sailings — are off-limits to US travelers. Two 30-day White Continent expeditions involving New Zealand were revised a while ago, but many customers kept their bookings.

Lindblad had been working on a 'special dispensation' from the South American countries, based on the strength of the company's health protocols, and up until a week ago was holding a webinar with customers in preparation for going. But then cases spiked in the US and people were spooked about the US Centers for Disease Control and Prevention's recommendation against cruising, an 'enormous headwind,' Sven Lindblad said.

It didn't make economic sense to forge ahead with the possibility of the virus getting further out of hand in the coming months.

Focused on April — maybe Baja and Galápagos before

So, now, Lindblad is retooling for a 'significant start' in April. Before then, it may be possible to operate in the Galápagos, a year-round market, and/or Mexico's Baja California.

Sven Lindblad stressed the company's flexibility as a nature-focused operator of small ships that doesn't require lots of dock reservations — it can anchor and use Zodiacs to explore. Sailings from April onwards are in nature areas like the Arctic, Alaska and the South Pacific.

All those places, without major population centers, are likely to be 'way less stressed with COVID,' he pointed out.

Net loss available to stockholders was $27.4m, or 56 cents per diluted share, compared to the year-ago net loss of $0.5m, or a penny per share. Tour revenues decreased $100m, or 99%, from Q3 2019. The decline was driven by a $76.6m decrease at the Lindblad segment and a $23.4m decrease at Natural Habitat as a result of rescheduling nearly all expeditions due to COVID-19.

For the last nine months of 2021 bookings are 12% ahead of the same period in 2020 as of the same date a year ago. New bookings continue, including over $44m since March 1.

The majority of customers whose sailings were canceled are opting for future travel credits instead of refunds, CFO Craig Felenstein said.