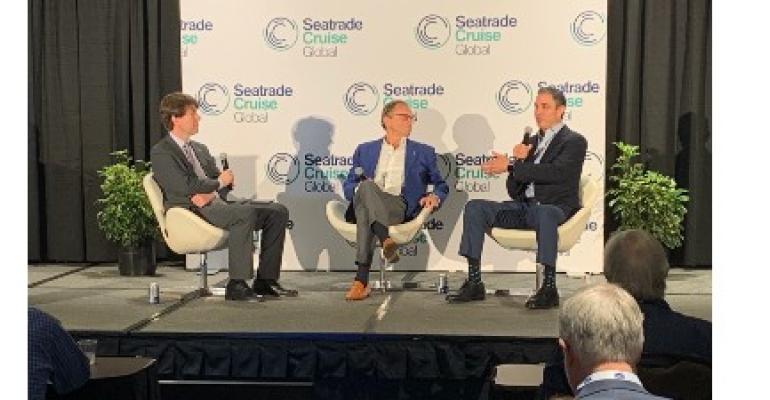 Russia's war in Ukraine is 'definitely not helping' expedition cruising but things could be worse, Silversea Cruises CEO Roberto Martinoli said during an expedition panel at Seatrade Cruise Global.

The Russian Far East is off-limits, and people who don't know geography very well may be avoiding areas that aren't actually troublesome, but there are plenty of other places to go.

The impact on Ukrainian crew, though, is 'heart-wrenching,' Seabourn President Josh Leibowitz said. 'One woman left her country and kids in order to keep working. The impact is, first and foremost, on people.'

During the pandemic, fielding small ships in remote destinations was an advantage because people wanted to be away from the crowds. Though that presented operational challenges, travelers booking bucket-list destinations like Antarctica didn't cancel as much, and Silversea's Antarctic trips had the best load factors of the fleet, Martinoli said.

'This business is capacity-constrained,' according to Leibowitz, explaining there's a desire for extreme luxury experiences with the market consisting of a few million people inside and outside the US, while there are just a few thousand expedition cruise berths.

Seabourn is due to add its first purpose-built expedition ship this year, with the 264-passenger Seabourn Venture to debut in July and sister Seabourn Pursuit to follow in 2023.

Destinations, not the ships, drive demand

But it's the destinations driving demand, not the new ships, according to Martinoli, who said: 'We had our smallest and oldest ship in the Galápagos and it got the best passenger feedback because the destination is phenomenal. The destination prevails over everything else.'

That ship was replaced with the purpose-built Silver Origin. 'When you improve the assets, it makes the passengers more comfortable,' Martinoli added. 'It helps, but the destination is paramount.'

Expeditions are expanding the market for luxury cruises by drawing new people, the speakers said.

They're affluent, yes, but psychographics are more relevant than demographics, according to Leibowitz. Seabourn's market for Antarctica ranges from young people who made a lot of money in the tech sector to families and people in their 50s or 60s who've always dreamed of going.

'We had a 104-year-old out on the Zodiac bow, photographing penguins,' Martinoli said.

The market consists of more extremes than those who sail on Silversea's classic fleet, with younger people and more children taking expedition trips. In the recent season, Silversea's new 'Antarctica Bridge' program that flies people to embark the ship in Antarctica, skippng the Drake Passage, attracted younger, wealthy people with less time to be away.

Need for better communications about sustainability

Operating in a sustainable way is critical — and expedition lines are meticulous about that but the public often doesn't know or has the wrong impression.

'This industry's been crucified,' Martinoli said. 'We need to be more proactive in communications.' He said the various associations are helping tell a more accurate story.

On the controversial question of helicopters in Antarctica, neither Silversea nor Seabourn has them.

While polar regions have been the mainstay for expeditions, the destinations are diversifying to include places like Tahiti and Australia's Kimberley, where there's so much to do with the exploration tools on today's ships, Leibowitz pointed out.

But the economics of shoulder-season operations are very different, Martinoli noted, and that may lead to specialized expedition vessels that don't require costly ice-class designs.

There is, Martinoli and Leibowitz agreed, but the independents' biggest challenge is distribution so being part of a larger family is a huge advantage.

And that's certainly been true for a host of other reasons during the pandemic.