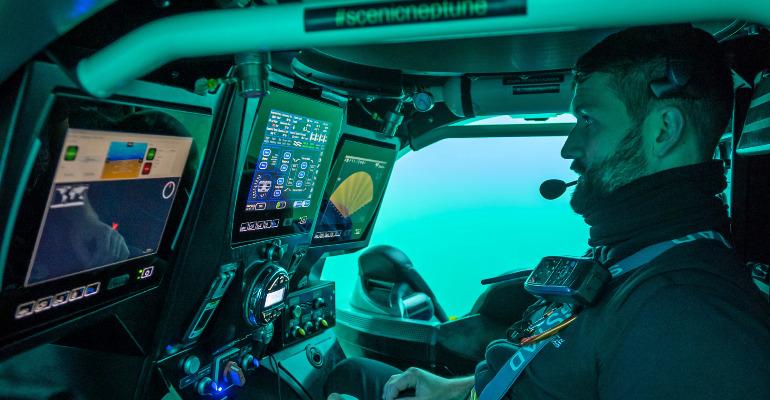 According to Scenic, submarine Scenic Neptune completed the first submersible dive on South Georgia Islands since the Falklands War

Scenic Eclipse made its first ever submersible dive on South Georgia Islands last month, with a spokesperson for Scenic Group claiming it to be the first submarine dive to take place among the islands in 40 years.

‘It was an extraordinary experience to be on board Scenic Neptune’s maiden submarine dive in South Georgia…,’ said Jason Flesher, expedition operations manager, Scenic Group who led the first dive. ‘We witnessed a diversity of rich marine life unlike anywhere else in the world, including bioluminescent jellyfish, Pelagic Antarctic Krill and a vast array of marine benthic fauna.’

Scenic is the first operator to be granted permission to dive submersibles on the islands, a process which took two years owing to the delicate ecosystem that exists there.

‘We’ve been eagerly awaiting this historic moment since the application process began over two years ago,’ explained capt. James Griffiths, director of marine operations, Scenic. ‘After working closely with the authorities to gain permission, we’d like to thank them for placing their trust in us to operate these dives...only two years ago we took the title for being the first operator to fly helicopters and partake in commercial submarine dives in Antarctica.’

The next submarine dive in South Georgia Island will take place during the 23-day Antarctica & South Georgia voyage scheduled for March 9, which is priced starting at £18,875 per person. Two more departures will follow in the 2022/23 Antarctica season: on November 20, 2022 and February 15, 2023.

Scenic Eclipse is currently sailing its 2022 Antarctica and South America season through to March 28, before travelling from Rio de Janeiro to Lisbon in order to begin its inaugural Mediterranean season.