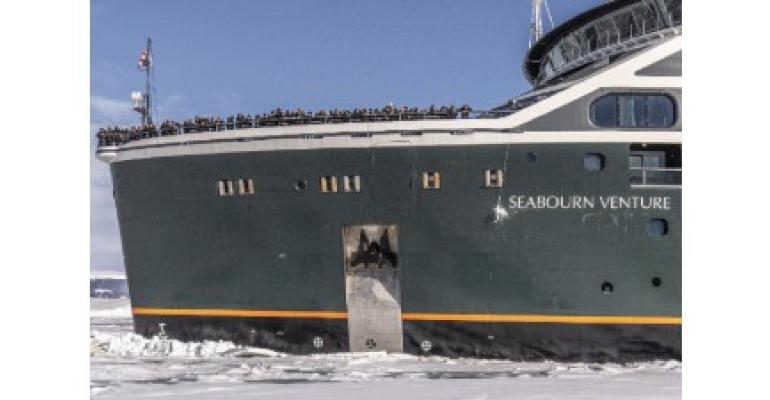 Seabourn Venture was named in fast ice in the Weddell Sea

Seabourn Venture, the line's first purpose-built expedition ship, was named during its inaugural Antarctica cruise on Sunday in the Weddell Sea.

The onboard team released a 'bottle' made of ice that smashed against the hull.

'We’ve eagerly awaited Seabourn Venture’s maiden voyage to Antarctica since the moment the ship debuted earlier this year,' Seabourn President Josh Leibowitz said. 'The extraordinary continent encapsulates exactly what we hope to bring to guests who sail aboard our new ship: adventure, discovery and awe-inspiring wonder.'

The cruise departed San Antonio, Chile, Nov. 7 and sailed down the scenic coastline of fjords and glaciers before reaching the White Continent.

Hikes and Zodiac explorations were led by a 26-member expedition team of wildlife experts, scientists, historians and naturalists. Passengers also had the opportunity to kayak or to dive in Seabourn's expedition submarines.

Through February, Seabourn Venture will operate 11- to 22-day voyages to Antarctica, South Georgia and the Falkland Islands. In March and April the ship will embark on seven- to 12-day expeditions in Brazil and the Amazon.

Starting in May are two new itineraries encompassing the British Isles and Iceland. Between June and August, Seabourn Venture will explore the Arctic with a series of 14- and 15-day Greenland/Iceland voyages.