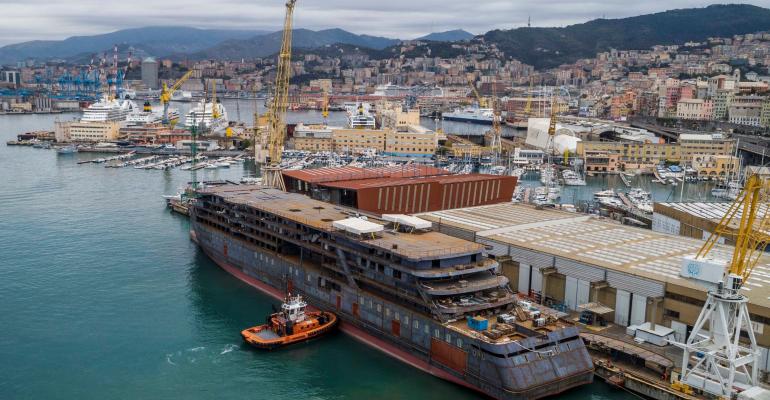 The hull, with its superstructures built up to deck 9 was built at the CIMAR shipyard in San Giorgio di Nogaro. The new ship was floated out on March 30 in Trieste and then left for Genoa – a journey of about 1,200 miles.

The vessel will see further superstructures, built in Genoa in recent months, added and the installation of the propulsion systems and interiors.

‘We are proud to welcome the hull of Seabourn Venture, a prestigious order for Mariotti and Genova Industrie Navali Group,’ commented Marco Bisagno, president of T. Mariotti.

‘The interest shown by the institutions, which I thank for being here today, comforts us also about the future of the shipbuilding industry in Genoa, a sector that employs many people. We are confident that what is being discussed regarding the possible renewal of the Italian ferry fleet can bring new orders for our shipyards,' he added.

Expedition capable 132 suite Seabourn Venture is designed and built to PC6 Polar Class standards, and features two custom-built submarines and 24 zodiacs allowing all guests to go out on excursions at once.

Seabourn Venture debuts with Norway cruises in late 2021 and is scheduled for Arctic, Caribbean and Central and South America expeditions between early May and late October 2022.

How IAATO operates within the Antarctic Treaty System
Oct 11, 2021