Straight from the horse’s mouth: Three expedition leaders talk about their life and times 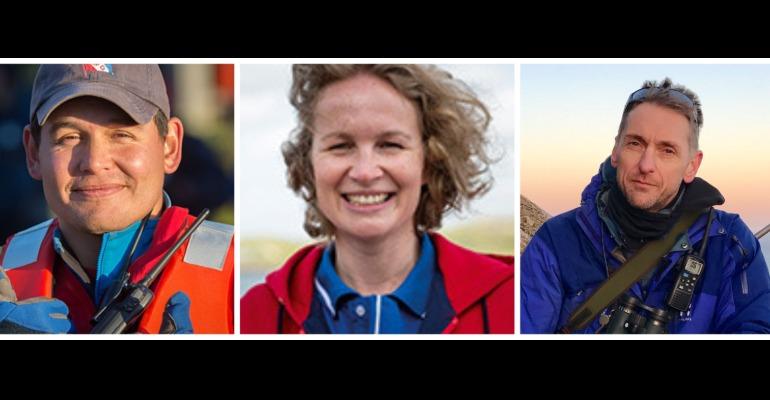 A big challenge in expedition cruising is matching and exceeding guest expectations in the field, says Anja Erdmann-Rutten, expedition leader with Poseidon Expeditions.

Poseidon operates 114-guest Sea Spirit seasonally in the Arctic and Antarctica and in summer, sails 50 Years of Victory  to the North Pole.

She has experience of working both in the office and onboard  and is well placed to see the view from both sides, she relates. ‘Guests want to see wildlife and nature close up like the imagery that is often portrayed in the sales brochures but is it realistic? she asks. ‘Can it set wrong expectations? Definitely,’ she feels and do these pictures make life onboard easy? ‘Definitely not,’ she claims.

‘Honesty is the main things to consider at point-of-sale and putting the right people on the right ship going to the right location’, says Erdmann-Rutten who believes the sales and marketing team play a much more important role than they sometimes imagine.

‘When onboard I try to under sell and over deliver - I may show ten things that the guest might see or do in South Georgia for example but say, if we can do six we will be lucky’ as not everything goes to plan and some things such as the weather and seas you cannot control.’

How will expedition evolve over the next five to ten years? Erdmann-Rutten  thinks we will see more use of toys and gadgets such as submarines and ‘as more ships enter the market rules/guidelines will become tighter in order to protect the environments we sail in.’

He grew up in one of Canada’s four Inuit regions in a small isolated town with just 450 people. ‘My father ran tours and boat charters in the area and throughout my high school years I used to join him in my holidays as a first mate, cook, zodiac operator and sometimes even the entertainment!’

Some years later, Adventure Canada ran programs training guides from the local communities onboard their ships and he joined the small family-run company and worked his way up to his current role.

Adventure Canada operates cruises in Arctic and east coast Canada plus the Atlantic Provinces as well as Greenland, Faroes, Iceland and Scotland.

‘Expedition is all about the destination,’ says Edmunds. ‘The experts on board explain what guests will see at the next stop and this learning combined with first-hand experience produces a great way for people to connect with a place.... people are meant to be part of the natural landscape and we have lost that in many places.’

‘Building community into our itineraries adds realism to the place,’ shares Edmunds.

‘Guests come on an Arctic Canada expedition cruise for many different reasons – its might be to see the Northern Lights, or see a polar bear in the wild or sail close to a large iceberg  but at the end the highlight is always meeting local people and learning a side of history they never understood before  - this makes a huge impact.’

Adam Rheborg  is an expedition leader with PolarQuest and Polar Latitudes operators of small ships sailing in polar waters.  Scuba diver turned expedition cruise guide and then leader he has been involved in expedition cruising for 20 years or so, he told Holly Payne, deputy editor Seatrade Cruise during the event.

Polar Latitudes runs a Citizen Science program on each Antarctica voyage to observe, record and report on natural phenomena in a challenging environment where it is hard to support long-term academic observation teams. ‘Guests really engage and it helps the scientists. I would like to see the Arctic scientific community open their minds to see what a great platform the tourism industry is and how it can assist them and their work.’

Rheborg  thinks five years from now expedition cruising will be more diverse – ‘we will need to stretch out and find more areas to explore and take the pressure off the more popular spots.’ He also believes there will be a higher demand for Citizen Science programs and more ships sailing in the Russian and Canadian Arctic as these areas become more accessible.