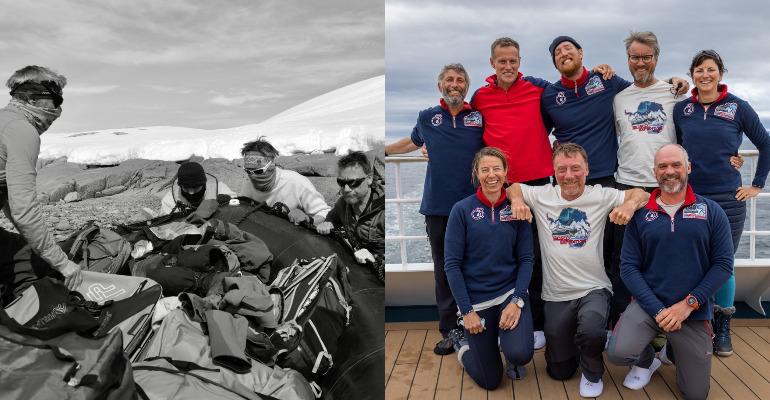 The emergency evacuation of the Antarctic Quest 21 expedition team underway (left); and the team safely aboard SH Minerva (right)

SH Minerva performed an emergency extraction of a team carrying out science and educational outreach in the Antarctic Peninsula, after COVID-19 containment restrictions in Argentina prevented the expedition group from being picked up as planned.

The Swan Hellenic ice-class vessel evacuated the Antarctic Quest 21 team from Portal Point, sailing into Charlotte Bay on January 16 during its second cruise exploring the Antarctic Peninsula. The researchers arrived safely in Ushuaia, Argentina in possession of valuable samples and data during a trip that was intended to commemorate the centenary of Sir Ernest Henry Shackleton’s final voyage.

‘The crew and guests on SH Minerva were delighted we could be of assistance in these challenging conditions and help the explorers safely complete their mission,’ said Swan Hellenic CEO Andrea Zito. ‘The team were very generous in sharing their experiences, bringing a richly stimulating additional perspective to the voyage.’

He went on to assert that ‘Swan Hellenic is committed to assisting and building links with the research community, so this was a very fitting early episode for the first ship in our fleet.’

The expedition team had spent five weeks in remote areas over and along the spine of the Antarctic Peninsula, before realizing there was a risk of getting stuck on the Peninsula and attempting an early return.

Met with ‘warmth and hospitality’

Antarctic Quest 21 expedition leader, Paul Hart, said of the experience, ‘The warmth and hospitality of everyone on SH Minerva was simply outstanding and we were treated with such kindness. It is hard to find words to express our gratitude for all that was done for us.’

The expedition collected samples providing vital information on the levels of microplastics and metals in the snow, on the ozone hole, the amount of UV reaching the Peninsula and meteorological observations to help improve the modelling of ice-mass accumulation and loss on the Antarctic Peninsula.