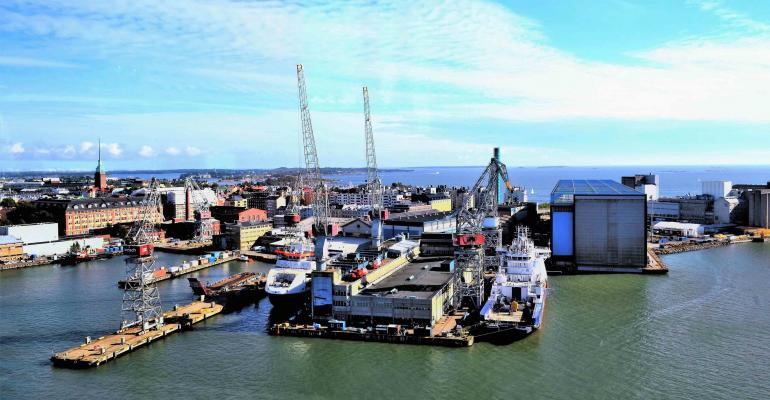 Helsinki Shipyard facilities are suited to build ships with capacity for 200 to 2,000 passengers as well as ice-class vessels FILE PHOTO: Helsinki Shipyard
Helsinki Shipyard — once a leading builder of cruise ships before their size outgrew the facilities — inked a contract for two luxury expedition vessels. The order is from Vodohod Ltd., Russia's largest river cruise company and an affiliate of the yard's new owners.

Operators are to be announced

The 148-passenger vessels are planned to sail in the Arctic, Antarctica and the tropics. The operators, who have not been disclosed, are a well-known international group that sources customers from around the world.

Planned delivery is August 2021 and January 2022. The price was not disclosed.

Design work is underway. The vessels will measure approximately 110 meters in length and 20 meters at the beam, with Polar Class 6 designation. Maximum crew capacity will be 110.

First order since the yard's sale

The business follows the May 20 sale of the former Archtech Helsinki Shipyard to Algador Holdings, owned by Russians Rishat Bagautdinov and Vladimir Kasyanenko, whose holdings include Vodohod.

'We are very proud and happy for the first order of the new shipyard, and I believe this now proves to everyone that we have started a new chapter in the operation of Helsinki Shipyard,' CEO Carl-Gustaf 'Calle' Rotkirch said. 'We will strengthen especially our design department in the near future and in connection with the start of production, also our production department. We invite everyone interested to contact our human resources department,' he added.

Strategy to re-enter the cruise market

'Our future strategy is to re-enter the cruise market as a second segment of our product portfolio,' Rotkirch told Seatrade Cruise News. 'There is a demand for cruise ships of a capacity of some 200 to 2,000 passengers and the Helsinki Shipyard is facilitywise suited for this segment.

'There is an emerging demand for ships bigger than the present small cruise ship boom and we will target that as well in the near future thanks to our Panamax-size, fully covered drydock.

'In addition, the Helsinki Shipyard alone has built 60% of the world’s icebreakers and we intend to continue on that path,' Rotkirch said. He noted the yard is currently competing with other European builders tendering for a German scientific icebreaker.

Russia's state-owned United Shipbuilding Corp. had been trying to sell its majority stake in Arctech Helsinki Shipyard after US sanctions against USC in response to Russia's actions in Ukraine had hampered business, making it tough to get financing for projects.

Rotkirch's appointment as CEO was announced when the Algador Holdings acquisition was completed. He brings extensive experience in the maritime and shipbuilding industries and is well known in the cruise sector.

Rotkirch had developed Grand Bahama Shipyard into a world-class cruise repair and refurbishment facility as president and CEO from 2008 to 2015. Earlier, he was sales VP at Aker Yards and project manager at Kvaerner Masa-Yards, previous owners of Helsinki Shipyard.

Vodohod operates more than 50 passenger ships along the Volga, Don and Kama rivers, the Moscow and Volga-Don canals, the Volga-Baltic Waterway, the northwestern rivers and lakes Ladoga and Onega. The company, with headquarters in Moscow and St. Petersburg, was founded in 2004 by the Volga Shipping Co.