Roald Amundsen goes further south than any Hurtigruten ship ever 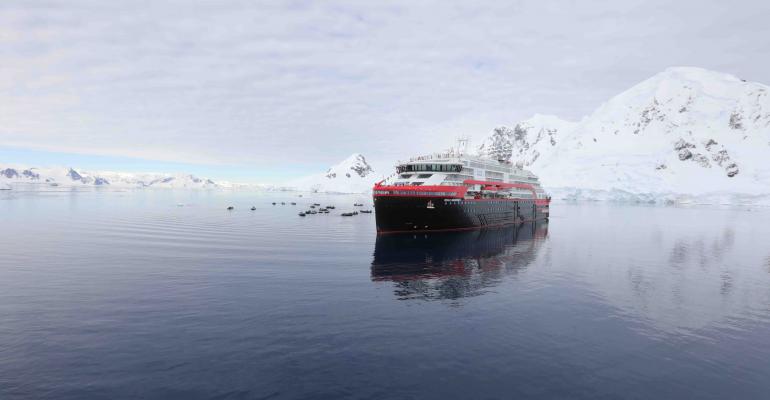 Roald Amundsen is pictured on an earier trip to Antarctica, on Nov. 7, the day of its naming festivities
Roald Amundsen recently crossed the Antarctic Circle and kept going, reaching 70º south, the furthest any Hurtigruten ship has gone.

The Norwegian company has been operating expedition cruises for 127 years.

After crossing the Antarctic Circle earlier this week, Roald Amundsen — under the command of Capt. Torry Sakkariassen — on Feb. 19 at 4:14 p.m. local time reached the ice edge at 70º south.

Following in the footsteps of polar hero Amundsen

‘Our guests are thrilled,’ Sakkariassen said. ‘This is what Hurtigruten's expedition cruises are all about, pushing new frontiers and creating unique experiences for guests from all over the world. We are following in the footsteps of polar hero Roald Amundsen himself aboard his namesake ship.’

Nearly finished with an 18-day cruise that visits the Chilean Fjords and Falkland Islands as well as Antarctica, Roald Amundsen will complete one more voyage in the region before journeying up through South and Central America, and ultimately spending the northern summer in Alaska.