Viking goes big and bold in the Great Lakes 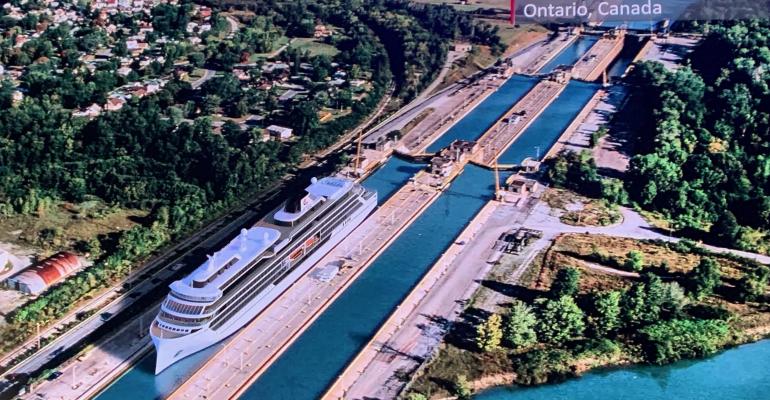 ‘This new cruising area, the Great Lakes, should be very interesting,’ Viking Founder and Chairman Torstein Hagen said, calling it an ‘underserved market … that we thought deserved better tonnage.’ Though Viking has a global footprint with its ocean ships, Hagen noted 88% of the passengers are Americans and ‘Many are reluctant to travel long distances by plane.’

Viking Octantis measures 30,150gt and stretches 205 meters/673 feet. It fits all the seaway’s locks and canals, including the Welland, which has a length limit of 225.6 meters/740 feet. Plus, the ship’s beam, draft and air draft are within the parameters.

Yet Octantis will be, by far, the largest international cruise vessel in the Great Lakes, nearly double the tonnage of new ship Hanseatic Inspiration, for example, which debuts in the region this year. That Hapag-Lloyd Cruises ship measures 15,650gt and stretches 138 meters/452 feet, while Plantours’ Hamburg, a Great Lakes stalwart, is 15,000gt and 144 meters/472 feet long.

Hamburg has the greatest passenger capacity, though, with 420, topping Viking’s 378 and Hanseatic Inspiration’s 230.

Also distinct to Viking is its new partnership with the National Oceanic and Atmospheric Administration that will bring NOAA scientists aboard in the Great Lakes to conduct research on weather, climate and ecosystems.

As well, Octantis will carry exciting rigid inflatable boats that launch on a conveyor from inside the ship and are capable of longer-range duration than Zodiacs. A pair of submarines will be part of the product, not an extra-charge item, Hagen said, and can be deployed on the Canadian side of the lakes, at least.

‘Any region of the world that is blessed with the Viking stamp of approval can feel proud,’ according to Stephen Burnett, executive director of the Great Lakes Cruising Coalition.

He credited the coalition’s cities, ports, tourism entities, states and provinces for their work to entice Viking and said the Saint Lawrence Seaway has been a ‘remarkable partner’ with leadership by Rebecca Yackley on the US side and Capt. Peter Burgess on the Canadian side.

From April to October 2022, Viking Octantis will offer varied eight-day itineraries bookended by the 13-day ‘Canadian Discovery,’ sailing from New York to Toronto (April) and Toronto to New York (October). This program delves into Atlantic Canada and Québec, and transits the locks to or from Ontario.

‘Niagara and the Great Lakes’ embarks in Toronto and transits the Welland Canal, with an excursion to Niagara Falls, then goes to Point Pelee, Ontario; followed by four Michigan cities: Detroit, Alpena, Mackinac Island and Traverse City, before arriving at Milwaukee. The reverse itinerary is also available.

Pre- or post-cruise stays in Chicago, Canada’s Algonquin Park and Churchill on Hudson Bay are available.

‘They’re outstanding itineraries,’ Burnett said. ‘We think they’re being extremely bold, particularly coming into Lake Superior.’ He pointed out the programs require a speedy ship, and calls are spread around to Canadian and US ports. No other line operates the exact routes.

‘The amount of thinking that went into these is extraordinary,’ Burnett continued, praising Viking’s Matt Grimes, executive director, itinerary development, nautical & technical operations, for his deep research. Grimes and colleagues across several areas visited to conduct their due diligence.

Some marquee names, like Chicago, are not on Viking’s 2022 charts.

During the recent expeditions reveal, Hagen said ‘We haven’t found a way to get into Chicago yet, but that may come.’

Instead, Viking Octantis is turning in nearby Milwaukee — which Hagen credited, jokingly, to Schlitz (‘the beer that made Milwaukee famous’) being a favorite during his student days stateside.

Burnett explained it’s challenging to secure a berth at Chicago’s prime location, Navy Pier, because tour boats and dinner boats occupy most of the space. That’s why the Great Lakes Cruising Coalition informs that Milwaukee is just a 92-minute drive from key hub O’Hare International Airport, and many lines that turn in Milwaukee — Viking included — offer land add-ons in Chicago.

‘Viking has done a fabulous job in this first round of itineraries,’ in Burnett’s view. ‘They do a lot of customer testing. They have probably the finest research apparatus of any line. This is their first round. There will be other rounds.

‘The ports they’ve chosen work well. There are many others that work equally well.’

Muskegon, for example, didn’t make the cut but Burnett predicted the Michigan city will be included some day.

Several ports on the northernmost Lake Superior pop out in Viking’s program. And many more are untouched by any ships.

This is ‘an undiscovered part of the world,’ Burnett said. He’s been talking up the North Shore ‘Inside Passage’ as a future expedition destination. The Great Lakes Cruising Coalition will be leading an exploratory trip in June to scout anchorages there.

The North Shore offers hiking, kayaking, First Nations culture, an island with caribou (hunted by wolves that cross on the ice in winter) and much more as, Burnett said, ‘a most unusual part of the world.'

Such areas may suit lines seeking the ‘exotic’ closer to home, especially if geopolitical issues make some places truly risky or just hard to sell. Burnett considers the Great Lakes ‘a worthy destination in its own right’ that’s also in the ‘safest place in the world,’ nestled inside the US and Canada.

Viking’s expedition debut in the Great Lakes could be a turning point for the region, he thinks. Competitors are closely watching.

‘There’s plenty of space,’ Burnett said. ‘We are the last un-cruised region of the world.’