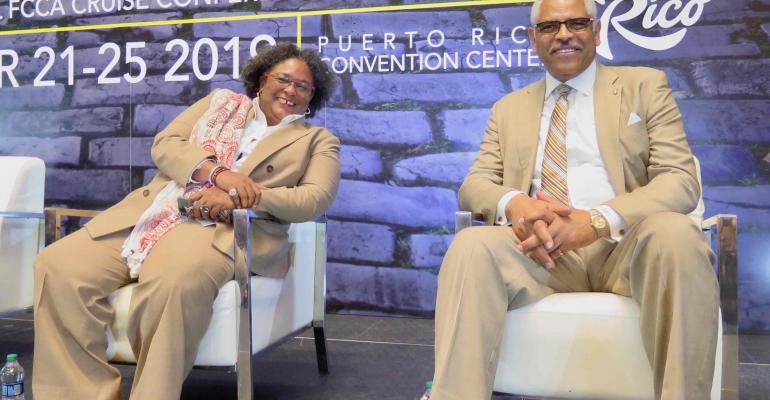 The impact of climate change on the world’s leading cruise destination, the Caribbean, made for a sobering start to the Florida-Caribbean Cruise Association’s big annual conference on Tuesday in San Juan.

It falls just a couple months after Hurricane Dorian tore up two parts of the Bahamas and is hosted by Puerto Rico, which was socked by 2017’s Maria and Irma.

‘Stay the course and go the distance’ was Mottley’s message to FCCA delegates. ‘It is easy for us to sprint and do well, and you’ve done well,’ she said, noting the cruise sector outpaces other forms of travel and the Caribbean handles one-third of the world’s cruise calls and generates almost half of global cruise revenues.

On the front line of climate change damage

Yet the region is on the front line of all the damage to come from climate change and will need money to address many areas just to keep places livable and economies viable. However, because of most islands’ GDP and per capita income, they don’t qualify for World Bank loans to strengthen infrastructure.

The cruise industry, Mottley said, recognizes this challenge and — ‘in a significant departure from the past’ — is stepping up to partner with destinations. Cruise lines’ response to Hurricane Dorian proved they are not fair-weather friends, she said.

And the prime minister cited the fresh memorandum of understanding between Carnival Corp. and Royal Caribbean with the government of St. Lucia, and said Barbados is in discussions with the cruise industry, as are the Cayman Islands and others.

Mottley also announced Barbados is prepared to host a summit between cruise lines and government leaders from all states touching the Caribbean Sea to focus on investment and infrastructure needs.

'We are your partner in good times and in bad times'

The FCCA event has returned to San Juan for the second consecutive year. 2017’s Hurricane Maria was the worst recorded disaster to hit Puerto Rico, Dominica and the US Virgin Islands. Then, just two months ago, Dorian became an ‘unprecedented 24-hour nightmare’ for Great Abaco and Grand Bahama, as Arnold Donald, president and CEO of Carnival Corp. & plc, put it.

‘These storms are becoming more violent and occurring more often. We need to be prepared. We are your partner in good times and in bad times,’ Donald told the FCCA audience, which included several heads of state, along with ministers of tourism and economy.

The cruise lines have stepped up generously to support hurricane relief. And, after such disasters, Donald said the goal is partnering with the government and community to quickly return ships to impacted destinations to help economic recovery.

‘Puerto Rico is recovering,’ he said, with passenger arrivals and economic impact at an all-time high.

This shows the ‘transformative power of tourism’ and the resilience of Puerto Ricans, said Campos, who thanked the cruise lines for their role.

Going forward, Puerto Rico is getting more homeporting business and greater air capacity, with airline seats reaching their highest level in 10 years during the coming winter season. Since San Juan is an air hub, this is important to the rest of the Caribbean.

‘Puerto Rico has tried to step up to the plate, to bet on tourism as a power for good. Our partnership with the cruise industry is critical,’ Campos said.