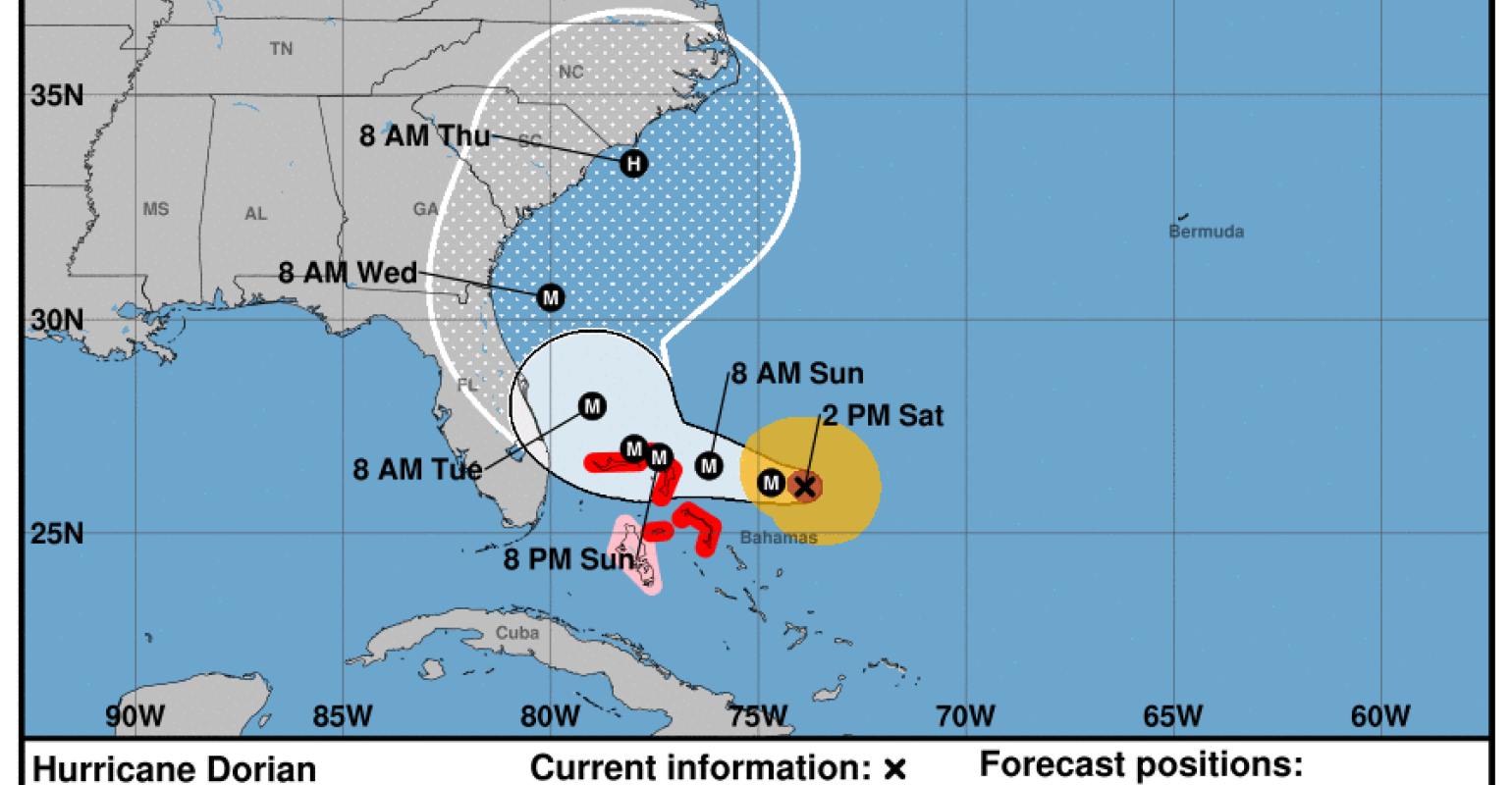 All week this maddeningly unpredictable and increasingly powerful storm has had the Caribbean, Bahamas and Florida on edge, and cruise lines scrambling to revise itineraries amid a string of changing forecasts and port and private island closures.

In the northwestern Bahamas, Grand Bahama Island is home to cruise destination Freeport and Grand Bahama Shipyard, an important repair and refurbishment facility.

Port Condition Yankee (gale-force winds within 24 hours) was declared for the Port of Palm Beach at noon Saturday. Grand Celebration, one of resident Bahamas Paradise Cruise Line's ships, sailed Friday as scheduled. However, due to Freeport's closure, the ship will remain at sea. Its Sept. 1 and Sept. 3 departures were canceled.

On Saturday, Carnival Cruise Line's Fleet Operations Center in Miami was monitoring sailings from its many Florida and US East Coast homeports.

Port Canaveral is likely to close on Sunday through the middle of next week. Carnival is optimistic the port will reopen by Thursday.

There was no change to today's Carnival Breeze sailing from Canaveral, however the Sept. 2 Carnival Liberty cruise was canceled. Carnival Elation's Sept. 2 cruise will now operate as a two-day sailing, departing Sept. 5 and returning Sept. 7, with a visit to Nassau.

Carnival Horizon's current cruise was expected to return to Miami early, on Saturday night, to let passengers disembark. Although the port has closed to inbound traffic, officials are allowing the ship in but it must depart tonight.

That means people who were to embark Sunday won't be able to do so. The port is expected to reopen as early as Monday or as late as Wednesday, and Carnival Horizon will operate a shortened cruise sailing the day the ship is able to return.

Carnival Conquest's Aug. 31 cruise from Miami is expected to operate as planned, while Carnival Sensation's sailing will visit Grand Turk on Sept. 2, Half Moon Cay the following day and Nassau on Sept. 4.

Carnival Victory's Sept. 2 cruise was revised to a two-day sailing departing Sept. 4 with one port visit, to be determined.

At Port Tampa Bay, passengers booked on Carnival Paradise for today's cruise were asked to arrive early and be aboard by 1:30 p.m. for an early departure. Carnival Miracle's Sept. 1 cruise was changed to an eight-day itinerary that's sailing tonight.

Majesty of the Seas' Aug. 28 cruise from Port Everglades was extended and the ship will now return Sept. 4. A call at Nassau was added. The ship's Sept. 2 cruise will now depart Sept. 4 and miss Key West but keep its call at Nassau.

Allure of the Seas' Sept. 1 cruise from Port Everglades is being shortened, and will depart Sept. 4, missing Labadee and Falmouth, but still keeping a Cozumel visit.

Empress of the Seas' Sept. 1 cruise from Miami has also been shortened and will now depart Sept. 4. Key West, Costa Maya and Cozumel were dropped from the itinerary, however the ship added a call at Nassau.

Harmony of the Seas' Aug. 25 cruise from Port Canaveral was extended and will return Sept. 4 instead of Sept. 1. The ship's stay in Cozumel was stretched to two days. In lieu of Harmony's Sept. 1 departure, a shortened cruise will sail Sept. 4 and visit Labadee.

Mariner of the Seas' current cruise was extended until Sept. 4, with its Sept. 2 sailing revised to leave Sept. 4. It will miss Nassau but call at CocoCay.

Miami-based Navigator of the Seas will extend its current sailing until Sept. 4, with the Sept. 2 cruise now departing Sept. 4 and visiting CocoCay on a shortened trip to return to Miami Sept. 6.

Sailing today from Miami, Symphony of the Seas will operate an extended cruise, returning Sept. 4. The Sept. 3 voyage will now depart Sept. 4 and keep its Nassau and CocoCay calls, but cutting out a sea day.

Norwegian Sky was scheduled to depart PortMiami today, sailing earlier than usual, with its calls at Key West, Freeport and Great Stirrup Cay canceled. Instead, the ship will visit Cozumel for an overnight stay and return to Miami Sept. 5, as scheduled.

Norwegian Breakaway's current sailing will be extended as the ship won't be able to dock in Miami Sunday due to the port's closure to in-bound traffic. It is hoped Breakaway can turn around on Sept. 4. This would result in the scheduled Sept. 1 cruise departing Sept. 4 on a shortened four-day itinerary that visits Cozumel.

Port Canaveral-based Norwegian Sun sailed to Cozumel for an overnight visit instead of making its scheduled calls at Nassau, Great Stirrup Cay and Freeport. It's not certain the ship will be able to return to Canaveral on Monday, as planned. Approval from officials is awaited.

Disney Fantasy was expected to sail today from Port Canaveral, as planned.

MSC Seaside was due to sail from PortMiami today, with embarkation earlier than usual.

MSC Armonia's Aug. 26 cruise has been extended until Sept. 4.  The ship's Sept. 2 cruise from Miami was changed to a shortened itinerary beginning Sept. 4. MSC Armonia will call at Cozumel and Costa Maya.

Port Everglades-based Celebrity Equinox was scheduled to depart one hour earlier on Saturday for its weeklong cruise.