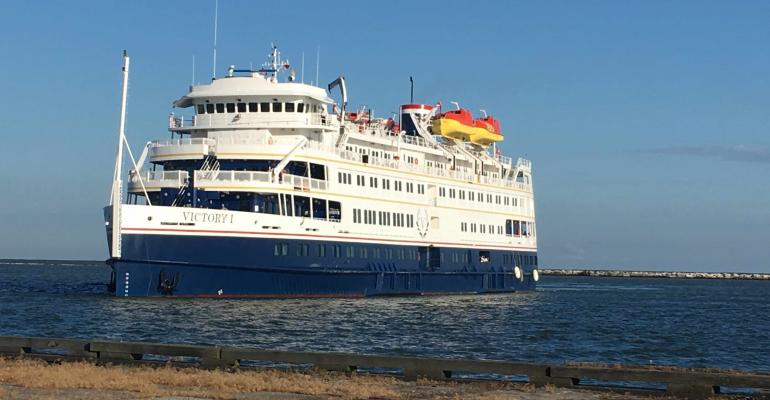 With cruise business growing in the Great Lakes, stakeholders are pleased about US Customs and Border Protection's recently approved modified cruise passenger process.

Great Lakes cruises are characterized by their multiple calls at US and Canadian ports. This has meant that each time a ship arrives in the US from Canada, CBP carried out a full inspection, meeting with each passenger.

Now, standard processing will still be required at the first port of arrival in the US. However, a modified procedure may be used for subsequent vessel arrivals from a foreign port or place on the same cruise, regardless of whether the arrival is a transit call or final debarkation. This eliminates the biometric/biographic query of the individual and, for non-US citizens requiring an I-94 form, it means completing one I-94 form at the first port of entry, which can be re-validated at subsequent inspections on the cruise.

'We put our resources where the risk is and reduce them where the risk isn't,' explained Stephen Dearborn, enforcement programs division, admissibility and passenger programs, Office of Field Operations, CBP. 'What the industry and ports will see is a smoother process and a faster process,' he said.

'My understanding is that the industry is growing significantly and has a good economic impact on the ports,' Dearborn added. 'We're here to facilitate that.'

Mobile passport and facial recognition technology are planned for the region. These have significantly expedited CBP processing in pilot projects at major cruise terminals in Florida.

'We are extremely pleased with the proposed changes that the CBP is enacting,' said James Palmeri, VP of product development for American Queen Steamboat Co., the parent of Victory Cruise Lines, which sails two ships in the Great Lakes. 'With the Great Lakes becoming a more popular cruise destination, the modified cruise passenger process will create a better product experience for our guests.'

Palmeri also confirmed his company is working closely with CBP to install the technology needed to implement facial recognition for passengers, which he said would 'make the Great Lakes a friendly environment for the tourism and coastal cruise industry.'

This technology could cut the time in half, based on experiences elsewhere, according to Rebecca Yackley, international trade specialist, Saint Lawrence Seaway Development Corp., an agency in the US Department of Transportation.

'Over the past decade, the Saint Lawrence Seaway Development Corporation has partnered with Customs and Border Protection at our US Great Lakes ports of entry to help facilitate the development of cruise ship clearance procedures that are unique to our ports,' Yackley said. 'Having these procedures in place will make for a better passenger experience that will ultimately increase cruise shipping in the Great Lakes.'

In 2017 and again in July this year, Yackley facilitated meetings in Chicago that brought together officials from CBP headquarters and field offices, cruise lines, ports, ships' agents and other stakeholders. They discussed the need for consistency in the clearance process and a seamless approach for passengers along with CBP’s requirement for compliant processing facilities.

Such facilities can be costly, especially for a region where the business is seasonal and, though growing, still small — in the thousands of passengers.

The Great Lakes are accessible only to small ships, about 400 passengers maximum, due to the size of the St. Lawrence Seaway locks. Because of this and the limited season, it's difficult for ports to find the resources to provide compliant CBP facilities.

In response, regional stakeholders decided to identify four strategic locations in the Great Lakes where adequate facilities could be developed. In return for their investment, they are essentially guaranteed a bigger share of the business.

Port of Cleveland steps up

Cleveland was the first to jump in.

Providing a permanent CBP facility is an 'expensive proposition,' Gutheil said. It will cost $650,000, and a $12.50 per passenger fee is part of the port's tariff to cover that. The facility is expected to be ready by early May 2020.

'We're hoping Duluth will be next,' Yackley said.

Detroit and Sault Ste. Marie are the other ports. At both, passengers are bussed a short distance to existing land border facilities for clearance before they continue on excursions. However, at  Sault Ste. Marie, in a new modified clearance process begun in late July, ships making their second arrival at a US port are being cleared on the ship. Those passengers on vessels making their first US arrival from Canada are still bussed to the land border for inspection.

Stephen Burnett, executive director of the Great Lakes Cruising Coalition, is delighted with the regional developments.

'At the end of the day what we are engaged in is primarily for the economic and social well-being of these Great Lakes communities,' he said.