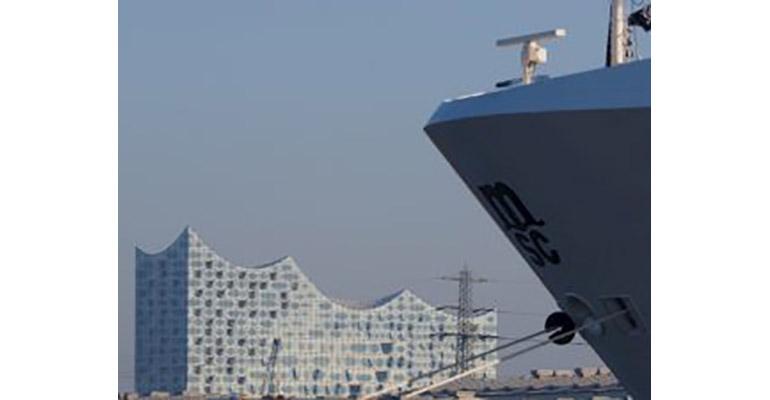 MSC Grandiosa, christened at Hamburg Nov. 9, in front of the hallmark Elbphilharmonie

Hamburg’s meteoric rise to Germany’s leading cruise port in recent years has slowed somewhat as business reaches a more stable development phase, according to figures released by Cruise Gate Hamburg (CGH) at the end of the 2019 season.

Sacha Rougier, managing director of CGH, said calls have been at a solid level this year although the passenger count did not reach 2018’s record. ‘Hamburg has enjoyed extraordinarily high growth rates over the past years. Between 2015 and 2018 the cruise sector grew by a staggering 76%, which was way above the European average,’ Rougier said.

She added it is unlikely to see similar growth rates in the future since cruise lines have started to shift high-capacity vessels to the booming Baltic Sea region.

Hamburg has traditionally been a base port for cruises to northern Europe/Norway and to western Europe and the British Isles. Companies operating smaller and medium-sized vessels still able to transit the Kiel Canal are also using Hamburg as a turnaround port for Baltic itineraries, but this is less of an option for large and mega-ships which would have to go around northern Denmark as they exceed maximum dimensions permitted in the Kiel Canal.

To ensure sustainable development of cruise tourism at Hamburg, CGH is increasingly focused on long-term agreements with operators willing to commit themselves to Germany’s largest port. Recently, CGH entered into a long-term agreement with the Costa Group, and the company said ‘more LTAs with major customers are expected to follow.’

CGA, a wholly owned subsidiary of the Hamburg Port Authority and the operator of Hamburg’s three cruise terminals, serves as single point of contact for all cruise lines. The company, moreover, takes a very active role in Hamburg’s strategic positioning and development, with a strong focus on suitability.

CGH pointed out that, in addition to the cold ironing connection in place at the Altona terminal, Steinwerder and HafenCity will be equipped with shore power by 2023. According to Rougier, that will make Hamburg the first port in Europe to offer alternative energy at all cruise terminals.

Apart from fostering Hamburg’s own sustainable development, Rougier — who also chairs the cruise committee of the International Association of Ports and Harbors (IAPH) — advocates for cooperation on green issues. At the beginning of October, CGH in conjunction with the sustainability committee of IAPH as well as other ports and European cruise shipping associations initiated a sector-wide initiative to record emissions from cruise ships as part of the World Ports Sustainability Program.